In this activity, students play role of scientists to explore the possible existence of other components of the Universe besides the normal matter. As they understand how dark matter and dark energy are discovered, they also realize that science understanding can change over time as new discoveries are made, adding to or modifying our prior knowledge. They also understand that what they can see is not everything in the Universe, there are still a lot of mysteries. This activity helps students develop scientific thinking and method of scientific investigation.
This activity can be followed by: "Dark matter & dark energy (Part 2) – Understanding the nature of dark matter and dark energy"

Gravity
Gravity is a force that makes objects move, bringing things together. Everything with mass has gravity. We can feel the force of gravity as we jump up and get pulled down to the ground. Planets, stars, moons and other objects in the Universe also have gravity. That’s why they orbit around each other, like for example the Earth orbits the Sun, or the Moon orbiting around the Earth, instead of flying randomly in space. That’s why we see the Moon and the Sun every day. Groups of stars are held together forming galaxies and even galaxies are held together by gravity forming galaxy clusters. Thus, gravity can be seen as the universal glue.

The more mass something has, the stronger the gravity it produces. The Earth’s gravity is stronger than the Moon’s because it is more massive. So our bodies are pulled down on Earth more than if we were on the Moon. That’s why astronauts can jump higher and more easily on the Moon than on Earth. Our bodies also exert gravitational forces on other objects, but because our mass is so low, the gravity from our bodies does not affect objects any way we can see. The strength of gravity also changes with the distance to an object. The pull between the Earth and the Moon is stronger than that between the Earth and Jupiter. This is because the Earth is closer to the Moon than to the Jupiter.

Gravity was first described by Newton as a force. Described more than 300 years ago, Newton’s theory of gravity is still applied today and it was used when scientists plotted the course to land man on the moon. Although Newton’s theory describes the strength of gravity fairly accurately, he didn’t know what caused gravity or how it worked. These concepts were left unknown for nearly 250 years, until Albert Einstein described gravity as the curvature of space. Space has 3 dimensions: up-down, left-right and forward-backward; and it can be visualized as a fabric, like a stretchy sheet. Any object with mass deforms space, just like a marble creating a dimple on the surface of the stretchy sheet. This curvature of space causes objects to interact and move towards one another, which is seen as gravity, a natural consequence of a mass’s influence on space. The more mass something has, the more the space is curved, and, therefore, the more gravity there is.

The Universe
The Earth, the planet on which we live is only a relatively small planet in the Solar system and in the vast Universe. In our Solar System, there are 8 planets, including Earth, orbiting a big star called the Sun in the center. Our Solar System also includes other smaller objects, including dwarf planets, moons orbiting planets, comets, asteroids etc. Outside the Solar System, there are similar systems, called planetary systems which also consist of planets orbiting a star. Gravity holds all these stars and planets together in something we call galaxy. We live in a galaxy called the Milky Way. It is estimated that there are about 200 billion stars in it; so it is a very big place. Outside our enormous Milky Way, there are about 100 to 200 billion more galaxies like our Milky Way. These galaxies are at enormous distances from us, in fact even with the most powerful telescope we cannot see individual stars from these distant galaxies. All the stars that we can see in our night sky with the naked eye are only within our Milky Way. All galaxies, stars, planets, from matter to energy to time itself, make up what we call the Universe. All the visible things we can observe in our Universe, we call them normal matter.

The normal matter that we know of only makes up less than 5% of the Universe. While this seems shocking, it is not that impossible. Think about what elements comprise the Earth. Everything that we encounter every day here on Earth is made of elements like nitrogen, hydrogen, oxygen, carbon and heavy elements like iron and silicon. Because we see them in such abundance, we might easily conclude that the rest of the Universe must be the same as Earth, a lot of heavy elements, a bit of hydrogen and no helium. However, these elements make up only 1% of the Sun. The Sun is composed mainly of hydrogen, some helium and not much else. Many stars, gas and other objects in space that are observable also consist of the same elements as the Sun. Just as some materials commonly found on Earth are a fraction of the Sun composition, the materials that comprise the Sun and similar space objects are not necessarily representative of all the matter in the Universe. Isn’t it possible that everything on Earth and in space that we know might be as well just a tiny fraction of what really exist in the Universe? Astronomers have found evidence for the existence of other components, the main components, of the Universe; they are called dark matter and dark energy.

Dark matter
Gravity allowed scientists to discover dark matter. In 1933, a Swiss astronomer, Fritz Zwicky tried to measure the total mass of a galaxy cluster by summing the mass of each individual visible galaxy in the cluster. He found out that their total mass was not enough to create the observed gravity that holds the galaxies together to form a cluster. With just the gravity created by all of their visible matter, the galaxies would not cluster easily, if at all. Thus, Zwicky concluded that there must be something invisible, inside and around the galaxies. This matter adds the extra mass to create that gravity, strong enough to form a galaxy cluster. Zwicky called the unseen mass dark matter.

More evidence for dark matter has emerged over time. Photographs of galaxies showed that most of their light, i.e. most of their stars, were concentrated near the center. So most of the mass of a galaxy is concentrated in its center, meaning that gravity is stronger at the center of a galaxy than in the outskirt. Therefore, it is expected that the stars near the center of the galaxy would move faster than those farther away. However, the measurements indicated that the orbital speed of stars was the same everywhere, regardless of their distance from the center. The conclusion is that there must be invisible matter that spreads throughout a galaxy, such that stars far away from the center will feel the gravitational pull of not only the central material, but all the other matter between them. The extra force of gravity from dark matter can cause them to speed up roughly to the same speed of the stars near the center.

Although it’s been discovered for some time, it’s still unknown what dark matter really is because it is invisible and does not interact with other normal matter that we know e.g. light, magnets, electricity. Scientists have proposed various ideas about the particles that make dark matter and designed experiments to test those ideas. However, the quest to define dark matter has been a process of elimination. Experiments have only ruled out possible candidates and left a few leading hypotheses, but yet to find the exact dark matter particles. The only thing we know about dark matter is that it is what makes it possible for galaxies to exist. Dark matter makes up 25% of the entire Universe, 5 times more than the normal matter that we know.

Dark energy
Something even more mysterious, called dark energy, makes up 70% of the Universe, besides normal matter and dark matter. Normal and dark matter generate gravity which holds things together. Dark energy is completely opposite to gravity; it causes things to fly apart. To understand dark energy, think about what happens when you toss a ball up into the air. It goes up and gradually slows down due to the pull of gravity. Eventually, the ball stops in mid-air and falls back to the ground. Now imagine a ball, once tossed up, keeps flying up further and further, instead of being attracted back down to the ground. This event seems impossible to happen, but this is the property of dark energy. In the 1990s, dark energy was discovered as astronomers observed such peculiar effect in the Universe. Scientists know that Universe has continually expanded i.e. galaxies moving away from each other, since its formation, the Big Bang. They also observed that the speed of expansion has increased, which is unexpected, because like the tossed ball, the expansion should slow down as gravity pulled on all of the galaxies. Or, the Universe would stop expanding and finally collapse, if gravity won and halted the expansion. Scientists concluded that the accelerated expansion cannot be caused by dark matter and normal matter, which generate gravity for the Universe, but must be by some form of mysterious energy. As it is invisible, they called it dark energy. Remember that the Universe has always been expanding; dark energy only speeds up this expansion. By measuring how fast the Universe is expanding, which is a combined effect of dark matter pulling galaxies together and dark energy pushing them apart, astronomers can determine the proportion between dark energy and dark matter. Like dark matter, scientists have many possible explanations, but no concrete answer for the nature of dark energy. It remains one of the greatest mysteries of the Universe. If one day we understand dark energy, it will change what we already know and the way we think about the Universe.

The presentation incuded provides some visual effects that help with concept explanation and a student worksheet for guiding students through the parts of the activity that they explore on their own as a group. The footnotes in the slideshow indicate which step in the activity is linked to which slide. There are also supplementary images that can be printed and shown to students, in case slideshow presentation is not possible. 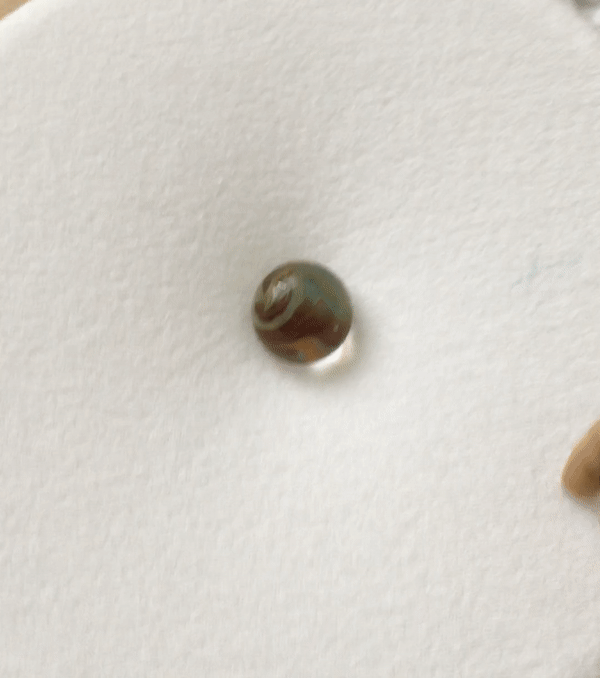 Note: Prepare in advance separate marble bags for the two setups to bring into class. 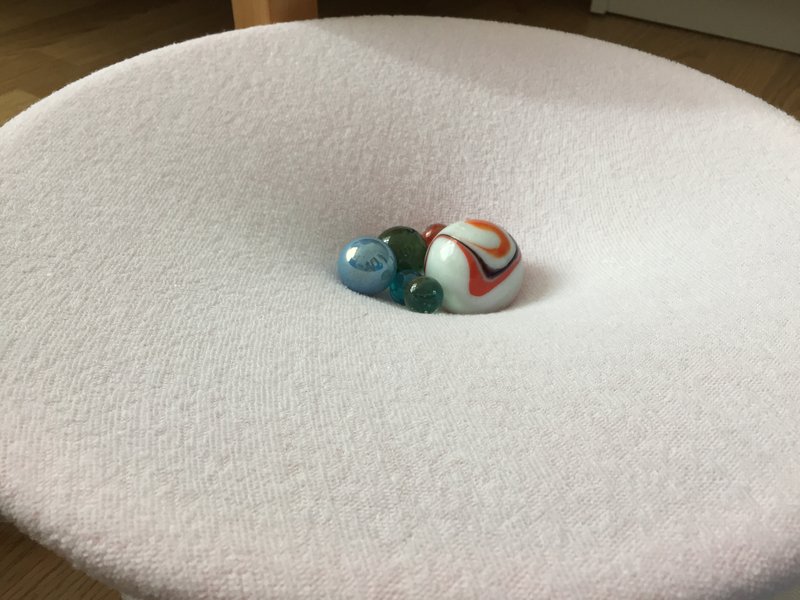 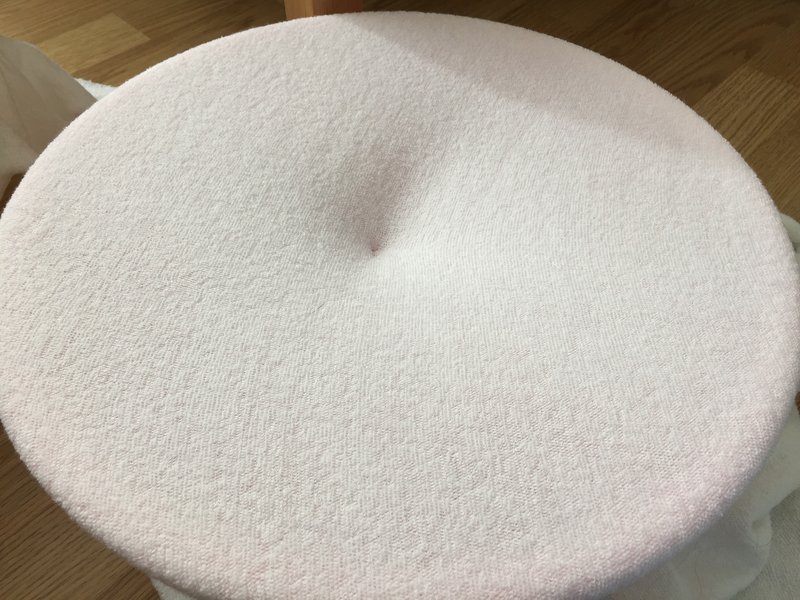 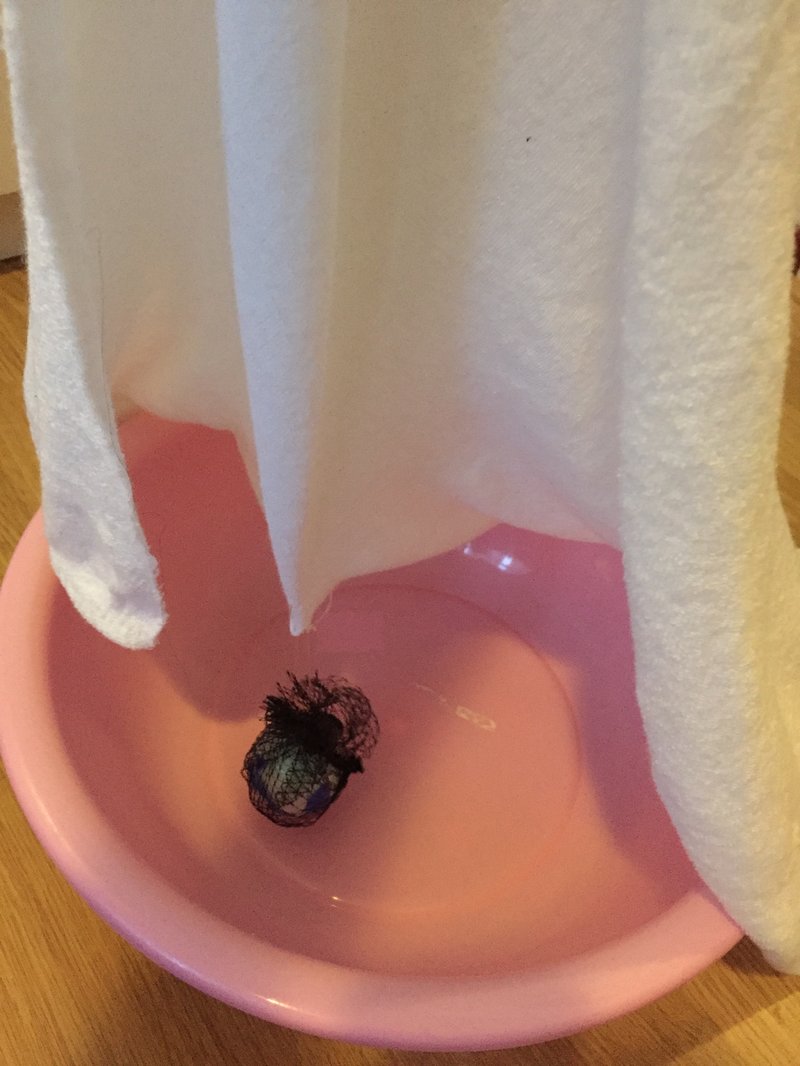 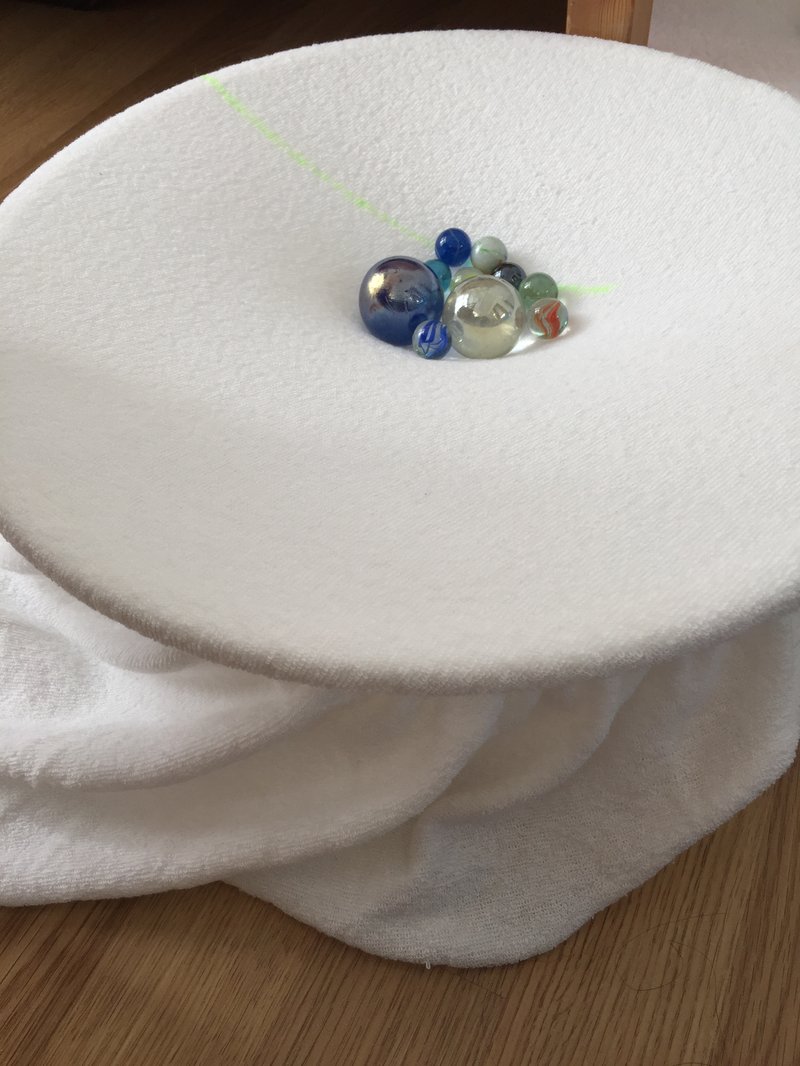 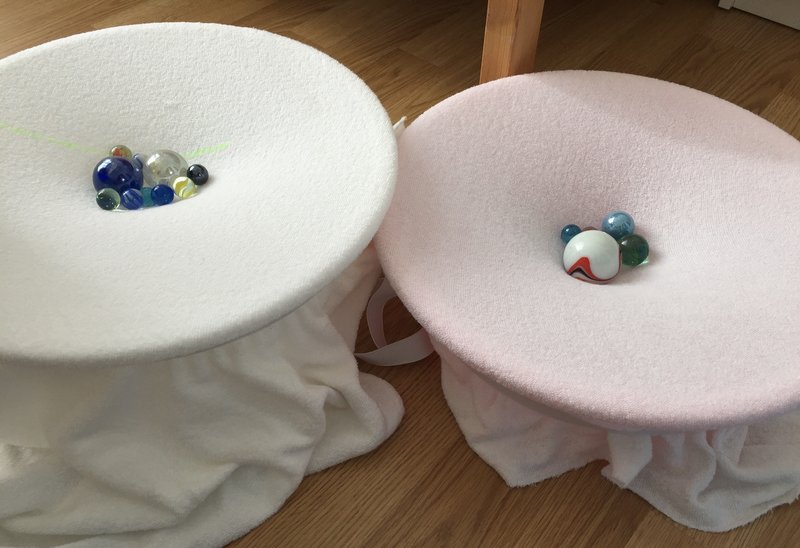 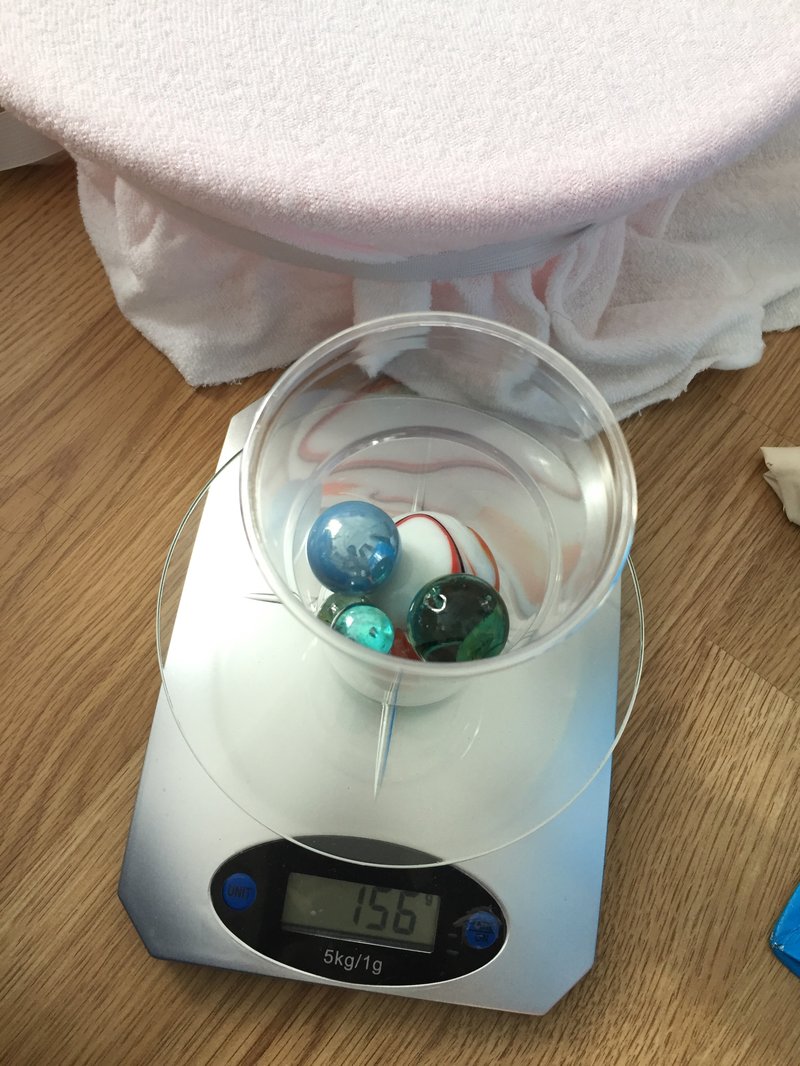 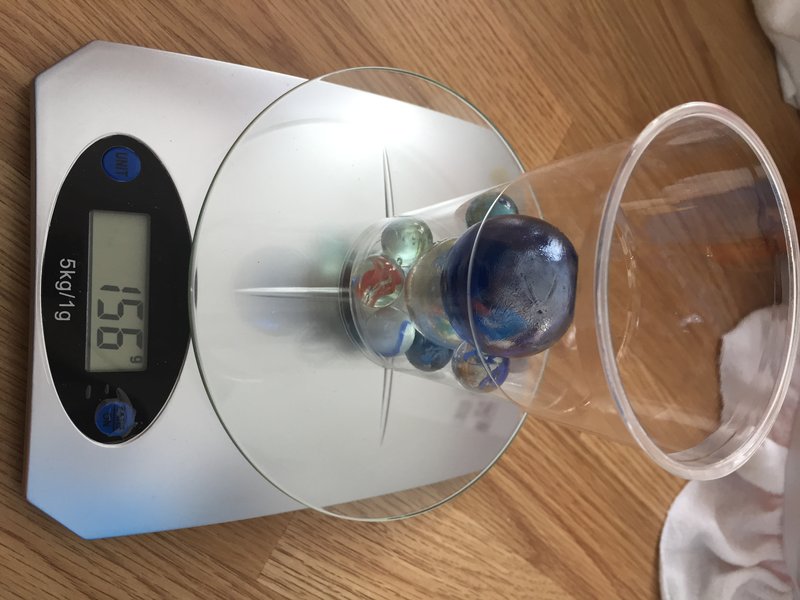 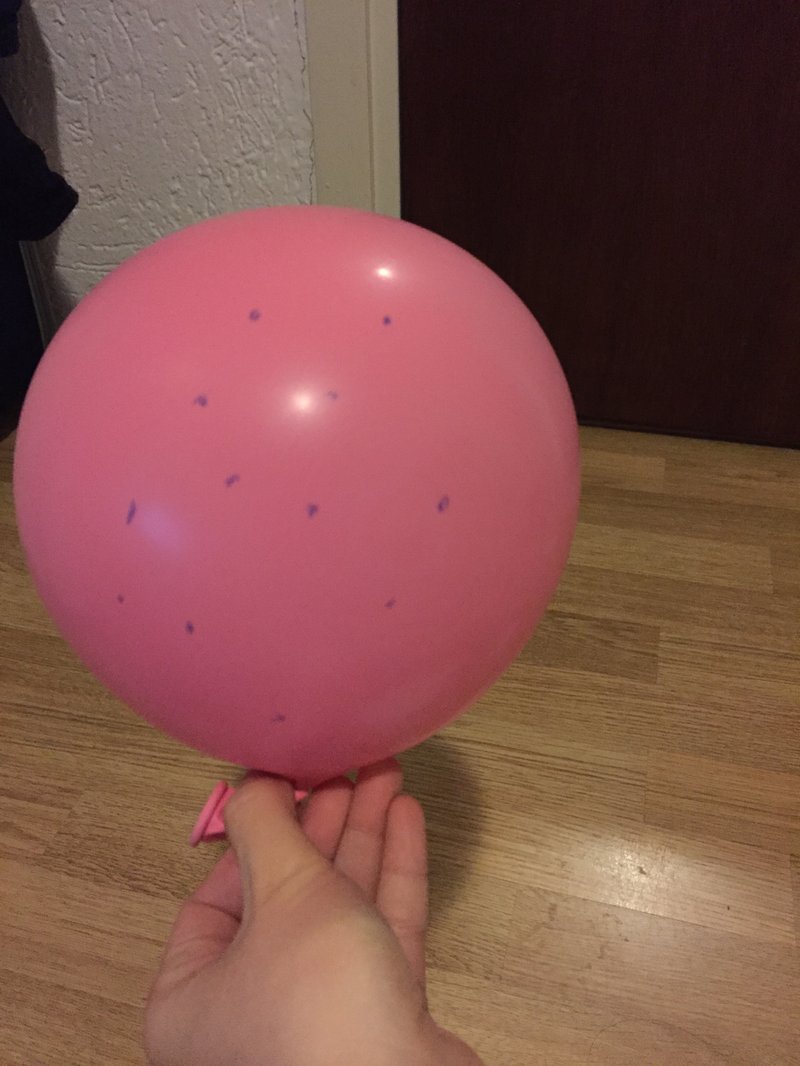 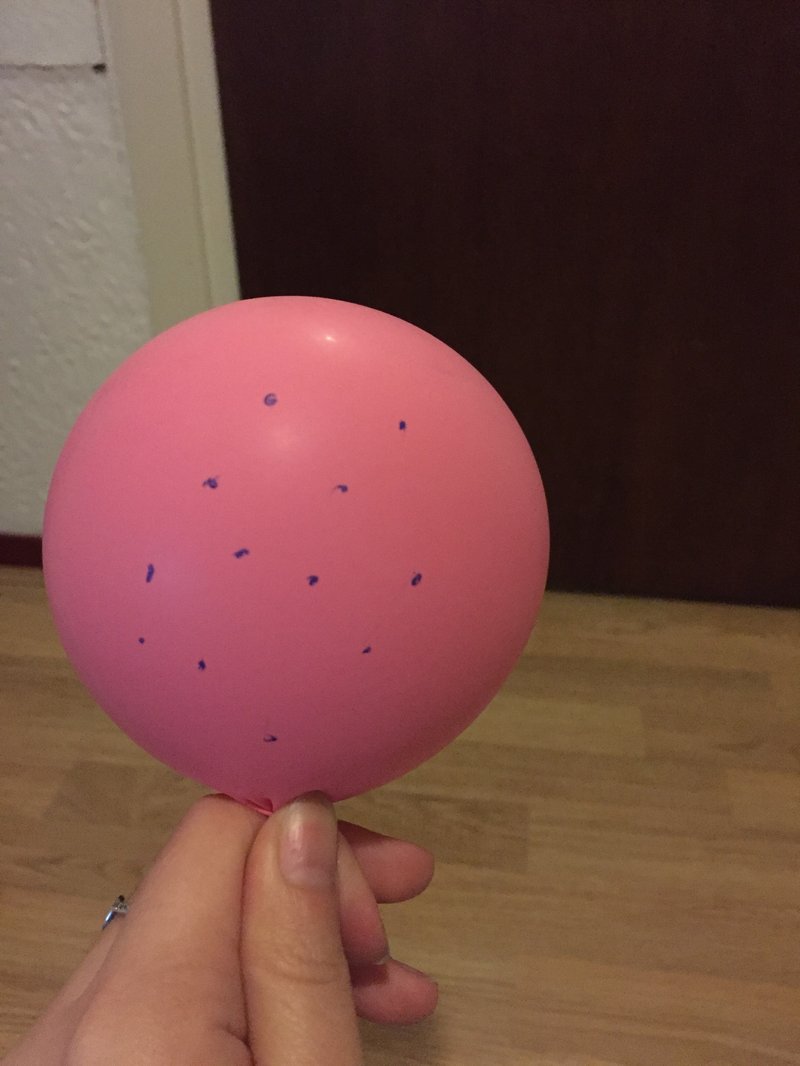 The Known Universe movie by AMNH