Every day, hundreds of thousands of objects from space collide with Earth or its atmosphere, to be precise. Almost all the objects are so small that their effects are unnoticed by us. They simply burn up in the upper atmosphere – a phenomenon known as the shooting star.

However, occasionally something bigger comes along – big enough to not completely burn up in the atmosphere and make it down to the surface. Even these rarely have an impact on us. Several people have been struck by small meteorites, such as http://news.nationalgeographic.com/news/2013/02/130220-russia-meteorite-ann-hodges-science-space-hit however, no one is known to have died as a direct result. In 1992, the Peekskill Meteor was seen travelling over much of the east coast of America, before landing on a car, damaging its bodywork http://apod.nasa.gov/apod/ap061119.html .

Very rarely, a massive meteorite will hit Earth with enough speed to form an impact crater. These craters can tell us a lot about the size and speed of the meteor, and any effects it may have had on the planet. For example, the Tunguska event occurred in Russia in 1908, flattening 2000 square kilometres of forest – the most likely cause of the massive explosion was a meteorite. 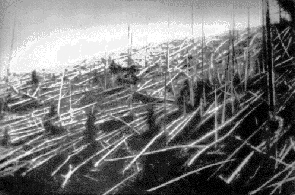 Image: One of the few images of the Tunguska Event

In the grand scheme of things, this was a relatively small impact. Craters can be dated back and linked to the timeline of events in the planet’s history, to show that meteorites may have been responsible for many previously unexplained timeline changes.

The extinction of the dinosaurs has been attributed to a huge meteorite strike that caused the Chicxulub crater under the Yucatan Peninsula in Mexico. Deposits in the crater have been aged to the same time as the last dinosaur fossils. The huge impact that resulted in the crater, which is 180 km in diameter and 20 km deep, would have triggered global tsunamis, earthquakes and volcanic eruptions. The dust and gas released may have also have blacked out the Sun, plunging the world into a mini ice age.

As Earth has an active atmosphere with weather, these craters can easily become lost because of weathering. Geological activity can also hide them, for example if the surface is re-covered with lava. Solar System bodies without atmospheres or geological activity have many more visible craters than Earth. Smaller objects do not burn up or slow down on bodies without atmospheres; hence, they may cause many more small impact craters than on Earth. 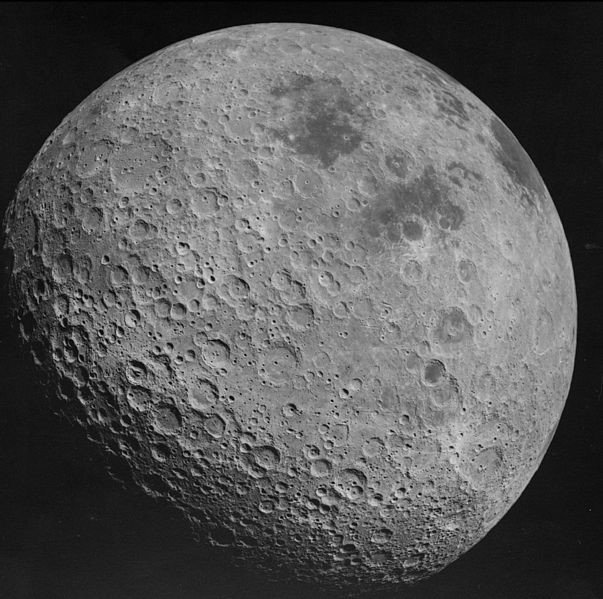 Image: The cratered face of the moon

The term ‘meteorite’ is given to anything that falls from space and makes it down to Earth. Asteroids and comets can both fall as meteors, causing craters on Earth if they land. Asteroids are made of rock and metal; most are found orbiting the Sun between Mars and Jupiter. Comets are made of rock fragments held together by ice. They have very elliptical (oval shaped) orbits, coming from outside Neptune towards the Sun and then going back again.

Craters are formed by the impacting body imparting its energy to the Earth, causing massive shockwaves. Their formation can be separated into three stages - The Compression Stage – This is the initial transfer of energy between the meteorite and the Earth. The front of the meteor hits the Earth, compressing the ground below it, and the back moves towards the front, compressing the entire body at an immense pressure. - The Excavation Stage – The energy vapourises (melts then boils) the meteorite and parts of the ground below it, sending rock vapour miles into the atmosphere. Molten and solid rock from around the impact site can be thrown hundreds of miles by the shock wave. Material thrown out is called Ejecta. A lot of material builds up around the crater, forming the classic ring. - The Final Modification Stage – some Ejecta falls into the crater, partially filling it.

The pressure of the shockwave can change the structure of the rocks around the impact crater. The intense heat can melt rock, sand, and soil nearby, which can form ‘impact glass’, a dark coloured glass as it cools rapidly.

Larger impacts can form much more complex craters, such as the Chicxulub crater (shown in the above animation). The shockwaves can rebound, causing uplifts within the crater and other complex patterns. Over time, weathering will change the shape of the crater further.

Show the class the photo of the craters on the moon, and ask them what they could be and what could have caused them.

Discuss meteors/meteorites with the class, and ask them whether they have ever seen a shooting star. Tell them about their origins as comets and asteroids, and discuss with them the impact they can have on Earth. Show the class the images of the Peekskill meteor and the damage it caused to the car and the injury sustained by Ann Hodges in 1954. Explain that these were only small meteorites, and that larger ones can lead to greater damage. Show them the photo of the Tunguska event, and explain how much damage a relatively small strike caused. Discuss the Chicxulub crater and the extinction of the dinosaurs.

Show them the video of Meteor Crater in Arizona: https://www.youtube.com/watch?v=odGrgsLkfUQ

If the class can understand the concepts, talk them through the three stages of crater formation: Compression, Excavation and the Final stage. Otherwise, explain that the crater is caused by the impact pushing material out from underneath the meteorite.

Ask the students what factors they think might affect the size of the crater formed, and what effect they might have.

In the first experiment, the students will investigate how the mass of a meteor affects the size of its crater. They should:

Depending on the class, some of the above steps (filling containers etc) may be done by the teacher prior to the lesson. Take repeat measurements and average the data or create error bars on the graph if appropriate for the class. If the class is not comfortable data graphs, it would be possible to simply relate the idea that bigger rocks make bigger craters.

Students will investigate how the drop height affects the size of the impact crater. Emphasise the idea that the drop height is related to impact speed, so a greater drop height would be the equivalent of a more fast-moving meteorite. They should:

1) Smooth the sand down
2) Drop the smallest (20g) rock from a height of 10 cm
3) Carefully remove it and measure the crater
4) Repeat the above steps, increasing the drop height (increasing in 10 cm increments up to 1 m is suggested, but this can be changed)
5) Plot a graph comparing drop height (X-axis) with crater size (Y-axis)

Depending on the class, take repeat measurements and/or create error bars. If the class is familiar with the equations of motion for constant acceleration (SUVAT equations), it would be possible to get them to plot impact speed against crater size instead.

Drop a rock of approximately 80g from the same height as the students were dropping their rocks in experiment 1, and measure the crater. The students have to use their graphs to try and work out the mass of this rock – this can be converted into a competition.

Ask the students to demonstrate and explain the formation of craters, and predict how the sizes of craters depends on impact masses and impact height