What would happen if all the ice of the Earth melted?
Marco Türk, University Heidelberg

The students will carry out two simple experiments that mimic the influence of melting land and sea ice on the resulting water level. They will realise the different effects it has on global sea levels.

Students will be able to
- describe the differences between two almost identical experiments.
- describe that the ice floating on the water surface does not contribute to the rise in the water level on melting, but the ice that covers a solid surface does.
- explain why melting sea ice does not contribute to the rising ocean levels, while melting land ice does.

Below is a set of items needed for one experimental set-up. Multiply it by number of experiments to be carried out in parallel.
- Large transparent bowl
- Ice
- Large stone or a similar item that serves as a platform (about half the size of the bowl)
- Water
- Overhead marker
- Strong lamp

One of the most serious consequences of the ongoing climate change on Earth is the rise in sea levels, which poses a threat to many coastal areas. Monitoring sea levels used to be a quite difficult task. Even until a few decades ago, this could only be done via direct measurements and probes on open seas. However, with the advent of Earth-observing satellites and radar altimetry missions, it became possible to monitor sea levels very efficiently and effectively. While in-situ measurements only provide a very local perspective of a given probe, and the resolution of the global network is rather low, satellite measurements allow observing the entire Earth with high redundancy and frequency as well as at a high spatial resolution. 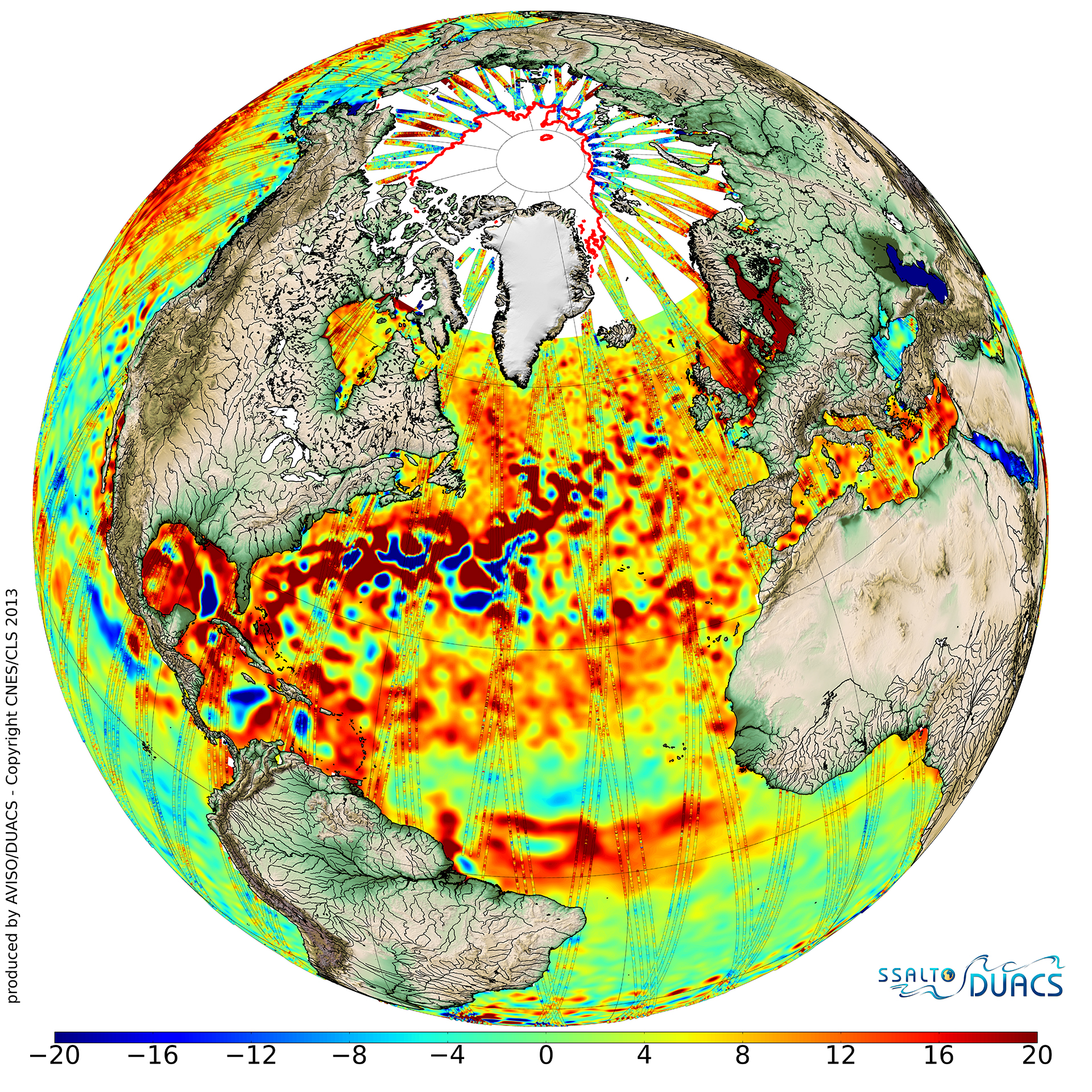 Figure 1: Average sea-surface topography for 2013 as mapped by CryoSat combined with data from other missions. Red represents higher sea levels (up to 20 mm above average) while blue represents low sea-level areas (down to –20 mm). The perturbations seen in the Northern Atlantic are caused by the warm Gulf Stream current (ESA/CNES/CLS, http://www.esa.int/spaceinimages/Images/2014/06/2013_sea-surface_topography).

Known satellites with altimetry capabilities include CryoSat and Jason 2/3. The most recent addition is Sentinel 3, a flagship of the European Copernicus Earth observing programme that offers unprecedented spatial resolution. 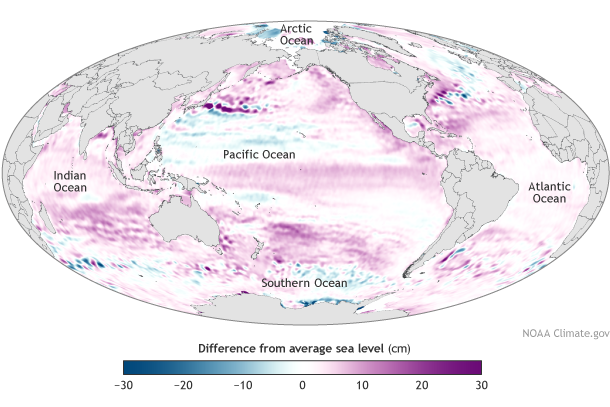 Figure 2:Sea level in 2014 compared to the global average at the mid-point of the 1993-2013 time series (NOAA Climate.gov map, adapted from Figure 3.25a in State of the Climate in 2014 report, https://www.climate.gov/news-features/understanding-climate/2014-state-climate-sea-level).

Oceans are on the rise

By combining such data obtained at different acquisition times, a general trend of the sea level evolution can be derived. When analysing all the data at hand, it is obvious that sea levels have been rising during the last one-and-a-half centuries (Figure 3).

Figure 3: This graph shows cumulative changes in the sea level of the world’s oceans since 1880, based on a combination of long-term tide gauge measurements and recent satellite measurements. This figure shows the average absolute sea level change in inches (1 inch = 25.4 mm), which refers to the height of the ocean surface, regardless of whether the land nearby is rising or falling. Satellite data are based solely on the measured sea level, while the long-term tide gauge data include a small correction factor because the size and shape of the oceans are changing slowly over time. (On average, the ocean floor has been gradually sinking since the last Ice Age peak, 20,000 years ago.) The shaded band shows the likely range of values, based on the number of measurements collected and the precision of the methods used (the United States Environmental Protection Agency, https://www3.epa.gov/climatechange/science/indicators/oceans/sea-level.html).

In summary, the current scientific results show that from 1993 until 2014, the ocean levels have been rising at a rate of up to 2.9 +/- 0.4 mm per year. That is 6 cm within 20 years. And the rate seems to be increasing. The major contributor to the rising oceans is the land ice that melts because of global warming. This already has had a measurable impact on the coastal regions worldwide. A higher sea level appears to increase the numbers of floods, as depicted in Figure 4. 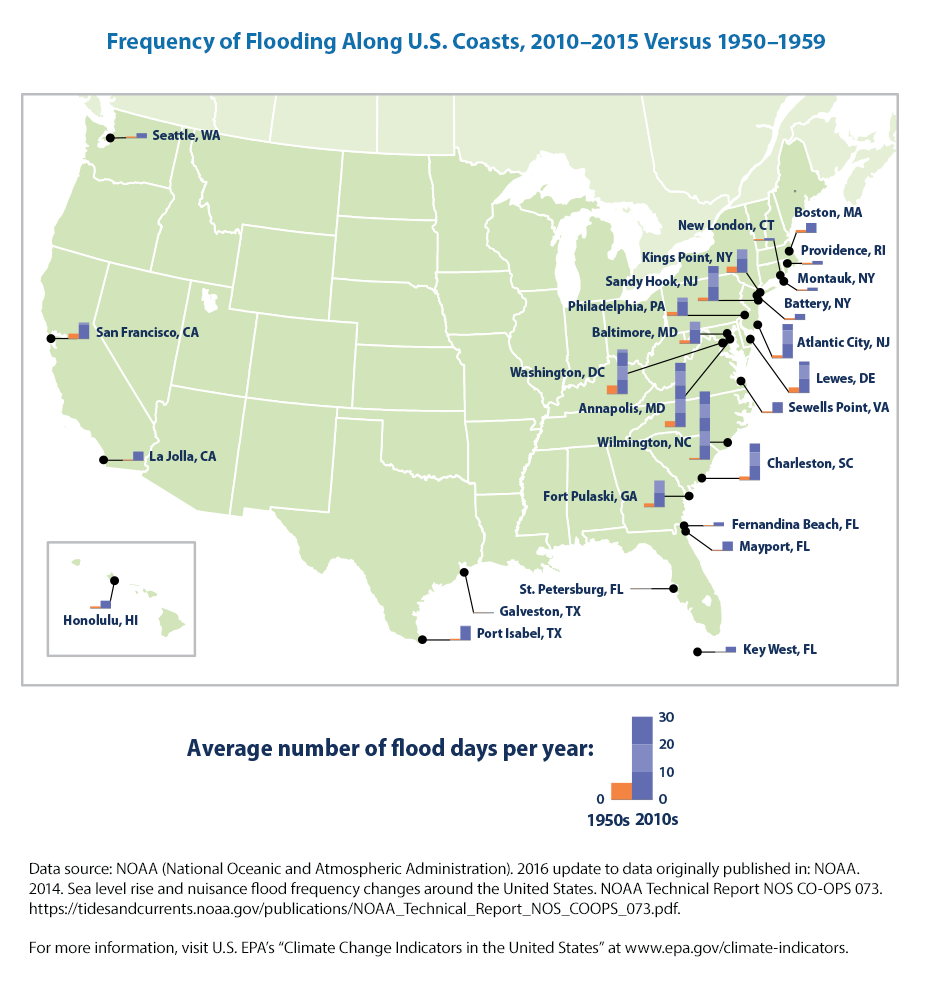 Figure 4: This map shows the average number of days per year in which coastal waters rose above the local threshold for minor flooding at 27 sites along U.S. coasts. Each small bar graph compares the first decade of widespread measurements (the 1950s in orange) with the most recent decade (the 2010s in purple) (United States Environmental Protection Agency, https://www.epa.gov/climate-indicators/climate-change-indicators-coastal-flooding).

Contrary to the Arctic, where the ice is just a sheet floating on the Arctic Sea, on the Antarctic, the largest ice masses are on land. According to the Principle of Archimedes, the floating ice masses in the Arctic displace water equal to their own weight, so the melting of floating ice does not influence the sea levels. On the other hand, melting land ice such as on Greenland or in the Antarctic contributes to the rise in the ocean levels. Radar altimetry satellites like CryoSat-2 help to monitor the thickness of ice sheets, both on land and floating at sea (Figure 5). 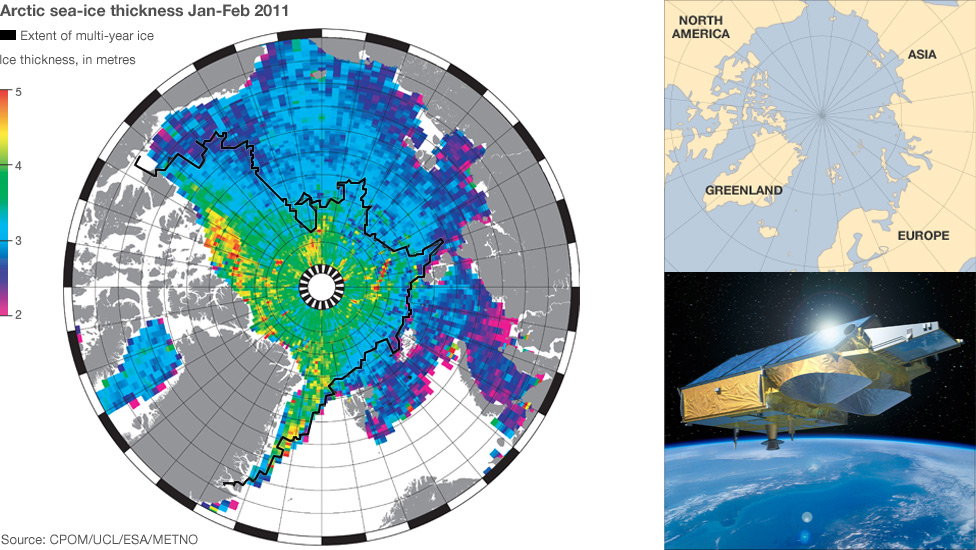 Figure 5: A colour-coded altitude map of the Arctic ice cover based on measurements from the CryoSat-2 satellite (BBC News, 21 June 2011; CPOM/UCL/ESA).

The buoyancy principle of Archimedes

Archimedes, possibly the greatest ancient mathematician and scientist from Syracuse, discovered the buoyancy principle, which is named after him. In simple words, it states that a body immersed in a fluid experiences a buoyant force equal to the weight of the fluid it displaces.

Figure 6: A sketch that illustrates the key parameters of a floating body and the equilibrium between its weight and the buoyant force, which is equal to the weight of the displaced liquid.

If, for instance, one wants to calculate the ratio of the depth of an ice sheet that is immersed in sea water, the following ansatz can be made.

Even frozen sea ice is practically fresh water and is almost salt free. Therefore, the density of normal water ice applies. Liquid sea water contains on average 3.5% salt, which increases its density to

This means that 90% of the ice sheet is below sea water.

The rise in the sea levels because of global warming is a concern for all of us, and everybody must take responsibility for future generations. The following experiment illustrates one major contributor to the rising sea levels: the melting of ice.

Set up the activity with the following questions:

Question 1: How do you melt ice?

Expected outcomes from discussion: Ice melts when it is heated or salted.
Remark: Tell the students that sea water freezes at lower temperatures than fresh water.

Question 2: Where on Earth can you find ice?

Question 3: Imagine that all that ice melts. What would happen to the water levels?

Expected outcomes from discussion: Water levels rise, because the ice is transformed into water.

Question 4: What would happen to the coastal areas on Earth when the sea levels rise?

Expected outcomes from discussion: They will be flooded.

Question 5: When you look at maps, what is the main difference between the northern and southern polar regions? Which of them is the Arctic, and which is Antarctica?

Expected outcomes from discussion: The Arctic Sea (North Pole) is covered by floating ice. There are no land masses there. Antarctica (South Pole) is a continent with a thick ice layer on top.

Start a discussion to gather opinions on how the melting of either ice shield can affect the water levels. The experiments will give the answer. 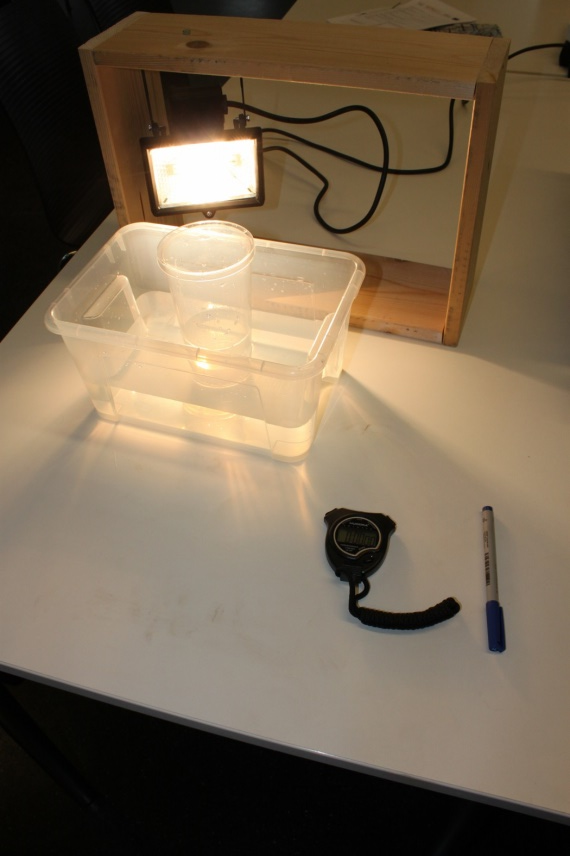 Figure 7: Experimental set-up. A plastic cup filled with water is used as a platform that carries the ice (own work).

Question 6: In our model, there is a stone with its top above the water surface and covered with ice. What would be the corresponding situation on Earth?

Expected outcomes from discussion: The model represents the ice masses located on land, as they can be found in the mountains on Greenland or on Antarctica (South Pole).

EXPERIMENTAL PROCEDURE PART 1
1. Ice is placed on the platform, and the lamp is switched on.
2. Wait until the ice has melted.

Task 1: Write down your observations during the first part of the experiment. Pay attention to the water level.
Expected outcome: The ice melts slowly and runs into the bowl.

Question 7: What happened to the water level? Explain the observation.

Expected outcomes from discussion: The water level rises. This is similar to pouring additional liquid into the container. 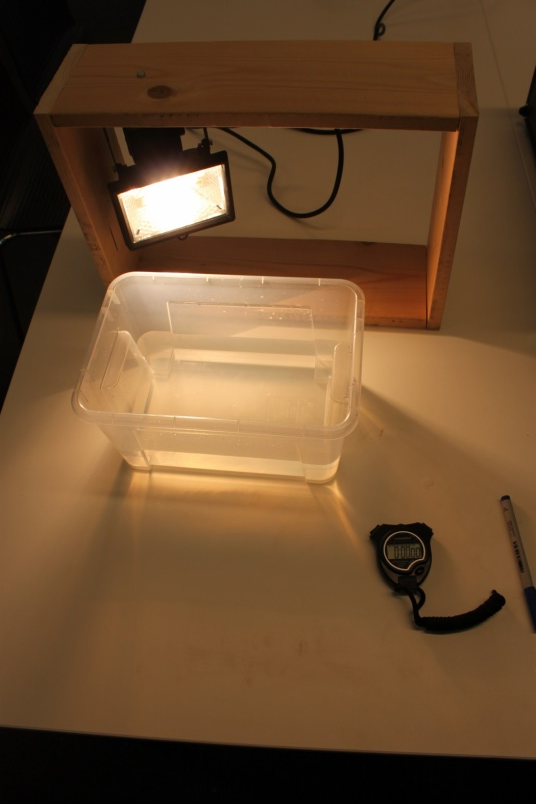 Figure 8: Experimental set-up for the second part. The platform has been removed (own work).

Question 8: In the second model, ice is floating on water. What would be the corresponding situation on Earth?

Expected outcomes from discussion: The second model represents the ice masses of the Arctic Sea floating on water or icebergs.

EXPERIMENTAL PROCEDURE PART 2
1. The ice is put into the water, and the lamp is switched on again.
2. Wait again until the ice has melted.

Task 2: Write down your observations after the second part of the experiment. Pay attention to the water level.

Expected outcome: The ice melts and seems to disappear.

Question 9: What happened to the water level? Explain the observation.

Expected outcomes from discussion: The water level did not change. There is just as much weight/mass of water inside the reservoir as there was before, when the water was in the state of ice. Therefore, nothing has been added.

Question 10: When reconsidering the experiment, which of the two forms of ice contributes to the rising sea levels? Land ice or/and floating ice?

Expected outcomes from discussion: Only land ice contributes to the rising sea levels. Floating ice does not contribute because the part of the ice immersed in the water displaces just as much water as would be added if the complete chunk of ice melts.

Question 11: What is the impact on the oceans when land ice melts, and the resulting water runs into the sea?

Question 12: How would you be able to witness such a rise?

The activity uses a simplified model to represent land and floating ice and shows how melting them contributes to the rising sea levels. The floating of ice is a first-hand example of the Buoyancy Principle of Archimedes. With the help of guided questions, the students will realise how this concept is relevant to climate change and draw conclusions from carrying out and observing the experiments.