The Solar System, in which we live, consists of the Sun as its central star, eight planets with their moons and several dwarf planets. Together with hundreds of thousands of asteroids (boulders) and comets, these celestial bodies orbit the Sun.

The Earth is a very special planet among these celestial bodies. It is our home! And the only world we know to have life on it. In order to understand its uniqueness, children need to compare the Earth to the other planets in the Solar System. As the Earth is located about 150 million kilometres from the Sun, the temperature is exactly right for liquid water to be present on the surface, unlike on most other planets. This proved crucial for the development of life!

The Solar System as a whole is part of the Milky Way Galaxy, a collection of about 200 billion stars that are arranged in a spiral, along with gas and dust. Billions of these stars have planets and these, in turn, have moons. This suggests that we are probably not alone in the Milky Way, but the distances between the stars are so big that a visit to another world is very difficult. Even the star nearest to us, Proxima Centauri, is 4.22 light years (i.e., over 40 trillion km) away from us. This is so distant that a journey there would take generations of human lives. Planets that orbit other stars than our Sun are called extrasolar planets or exoplanets for short. Astronomers have already discovered more than 2500 of these exoplanets.

We can categorise the planets of our Solar System into two types: the rocky planets, which are nearest to the Sun and have a solid surface, and the gas giants, which are farther from the Sun and are more massive and mainly composed of gas. Mercury, Venus, Earth and Mars appear in the former category, and Jupiter, Saturn, Uranus and Neptune make up the latter. Pluto, our formerly outermost planet, has been considered one of the dwarf planets since 2006. Between Mars and Jupiter is a so-called an asteroid belt, which circles the Sun like a ring. It consists of thousands of smaller and larger boulders. The largest of these have their own names, just like the planets. One of them, Vesta, is so large that it is also considered a dwarf planet.

This activity requires materials from the ‘Universe in a Box’ resource kit: http://www.unawe.org/resources/universebox/

If you do not have access to ‘Universe in a Box’ resource kit, use similar materials: (one set per student or group) * 8 plastic balls in different sizes to represent the planets * 1 larger ball (yellow if possible) to represent the Sun * Paint and brush * Planet pictures (download) * Clay or Papier mâché (check additional information) * Cotton 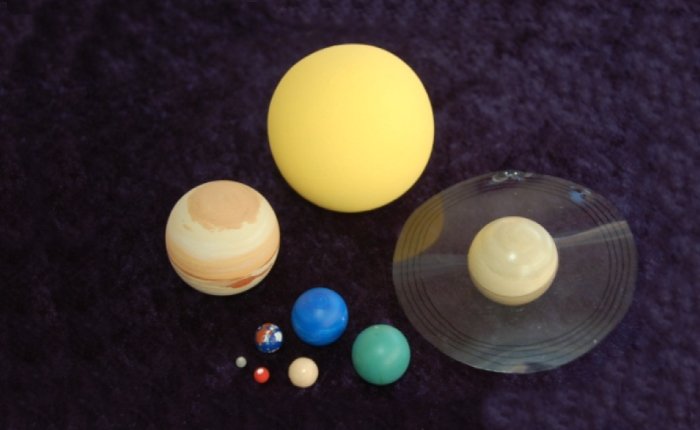 Let all spheres dry. Introduce the solar system and planets to the students. Use the information in the background and additional information sections. Show students images of the planets.

Draw concentric circles at the outer edge of Saturn’s plastic ring. Pull the ring over Saturn and fix it at its equator.

Using the plastic spheres and the pictures of the planets, together with the children, create models of the planets and Sun by making balls of cotton, clay, or papier mâché. 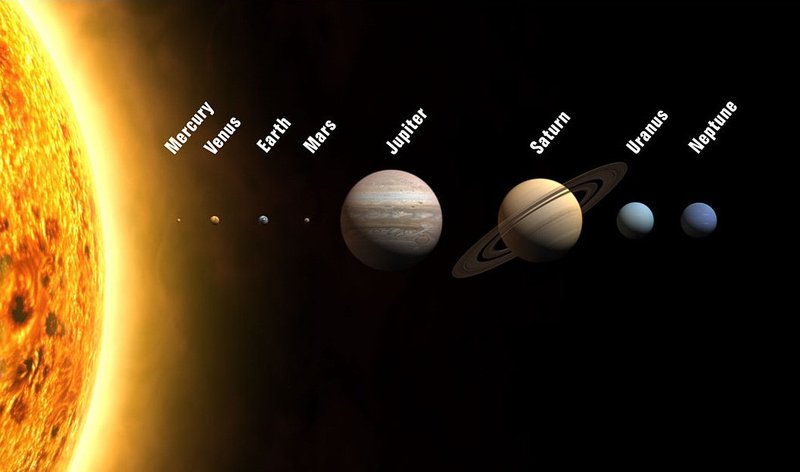 Invite a student or a group to pick one planet and introduce it to the class.

Students will prepare a roughly proportionate to-scale model of the solar system and arrange the planets in the correct order. They will work in small groups with the supervision of a teacher. After they complete the activity, they will learn about the size ratio and order of the planets of the solar system. They will also learn how to build simple physical models using materials like clay, cotton, etc.