To learn about craters and how the surface of the Moon got its features.

Students will be able to: - Use a model to describe how the Moon got its features. - Consider how some of the parameters affect crater shape and size, including projectile size, weight, height and angle.

Galileo Galilei, an Italian astronomer and mathematician from the 16th century, was the first man to take a close look at the Moon with a telescope. As he stared through the telescope for the first time, he couldn’t believe what he saw. Huge mountains, craters, highlands and valleys made up the breathtakingly beautiful lunar landscape.

Several years after Galilei’s discovery, another Italian astronomer named Giovanni Battista Riccioli created a map on which he named the largest ‘seas’ of the Moon (see image below). In reality, these seas are dark valleys that look like seas. No liquid water exists on the lunar surface, just some ice in deep craters. Because Riccioli believed that the Moon was directly influencing the weather on Earth, he called some of the seas ‘Sea of Tranquillity’, ‘Sea of Serenity’, ‘Sea of Rain’, ‘Sea of Clouds’ and ‘Ocean of Storms’.

The many craters on the Moon were created a long time ago by meteorite impacts. They all have different sizes and some of them have bright rays around them, an indication of their relatively young age (the dark zones are older). On Earth, the impacts of meteorites disappear over time because of erosion: rain, wind and water smooth the surface by wearing away irregularities until only the most recent ones are still visible. On top of that, the Earth’s atmosphere burns most meteorites before they crash onto the surface. The Moon, however, has no atmosphere, which means that all craters stay intact. This is why the Moon is scarred with so many craters—and they keep increasing in number as time goes by! 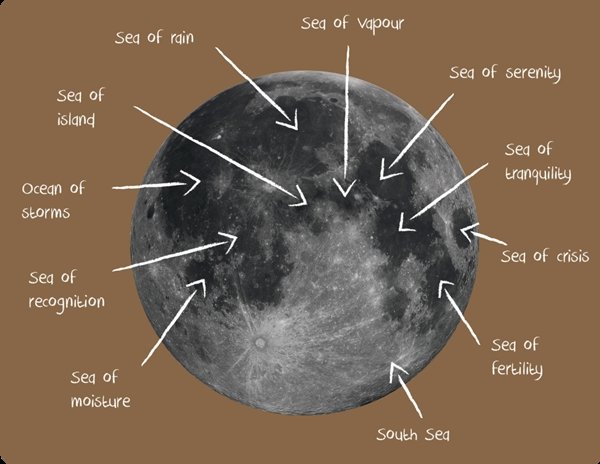 Spread out a thick layer of flour on a baking tin, followed by a thin layer of cocoa on top of it, using a sieve.

Ask the students to collect stones and other projectiles of different sizes and throw them on the tin at different speeds and different angles and from different heights. In this way, many different craters will appear.

Next, ask the students to compare real lunar craters on a picture of the Moon with their own findings.

Ask students to consider the following questions. What does the crater size depend on? How does the height affect the shape? What does the star-like shape of the throw-offs tell about the direction and velocity of the projectile? For example, in the above picture, when the projectile hits our lunar landscape from the left, one can clearly recognise the star-shaped throw-off of white flour, which is more pronounced in the direction of flight (to the right).

To facilitate this discussion, you can also let each group of students experiment to explore the answers. For example, one group could drop the same projectile from different heights and from different angles and another group can drop projectiles of different weights and sizes from the same height and angle. Now reverse the task of the groups. Ask the students to document their findings for each throw by drawing (to scale) the result of the throw.

Ask students what features are on the Moon and what caused them.

A similar activity has been documented by the Lunar and Planetary institute (USA): http://www.lpi.usra.edu/education/explore/LRO/activities/craterCreations/

Images of lunar craters that can be used as reference in the classroom: - http://oldsite.david-tyler.com/barbados2006_moon.asp - http://apollo.sese.asu.edu/LIW/20071204.html - http://target.lroc.asu.edu/q3/

This activity is a part of "Universe in a Box Activity Book" (activity 1.4): http://www.unawe.org/static/archives/education/pdf/Universe_in_Box_activitybook.pdf