To perform an experiment to measure the strength of gravity on Earth and to better visualise the gravity acting in the universe.

A series of review questions throughout the lesson allow teachers to check the progress of each learning objective.

For the full lesson plan: 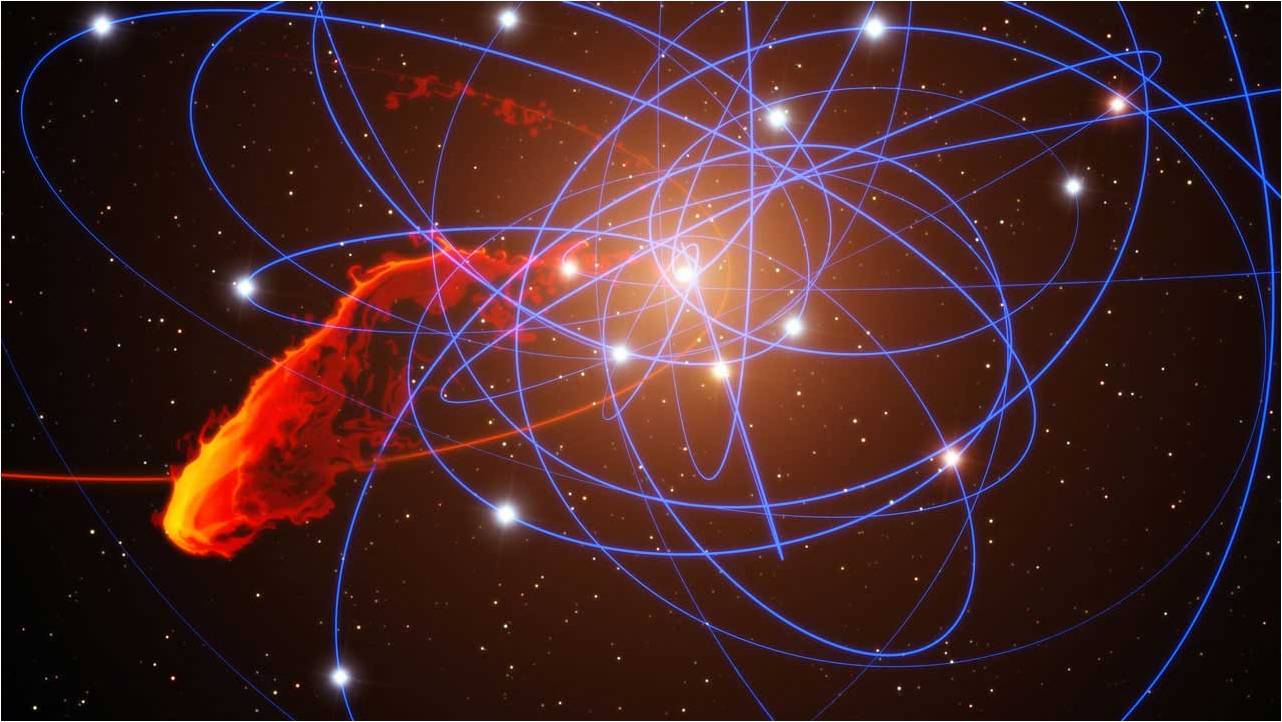 An artist’s impression, using real data from the European VLT telescope, of the stars that orbit the supermassive black-hole at the centre of the Milky Way galaxy and the cloud of gas, which is falling into it. Credit: ESO/MPE/Marc Schartmann

Gravity is one of the four fundamental forces in the universe. The force of gravity was first described mathematically by Sir Isaac Newton in 1687. His theory described how objects feeling the force of gravity behaved, but Newton could not explain gravity’s origins. This happened in 1916, when Albert Einstein published his theory of general relativity, which described gravity as the result of mass curving space-time around it.

Through observations made by big telescopes, our understanding of gravity is tested. There are many big telescopes around the world, observing space in all fields of the electromagnetic spectrum. Examples include the Very Large Telescope (VLT), ALMA, the Hubble Space telescope and the Lovell radio telescope. The next generation of big telescopes are currently being planned and constructed, such as the James Webb Space Telescope (JWST), the Extremely Large Telescope (ELT) and the Square Kilometre Array (SKA). The advantage of big telescopes is that they can detect fainter objects, looking further into space and therefore further back in time. They can also image the sky with a higher resolution, thus improving our view on the universe. 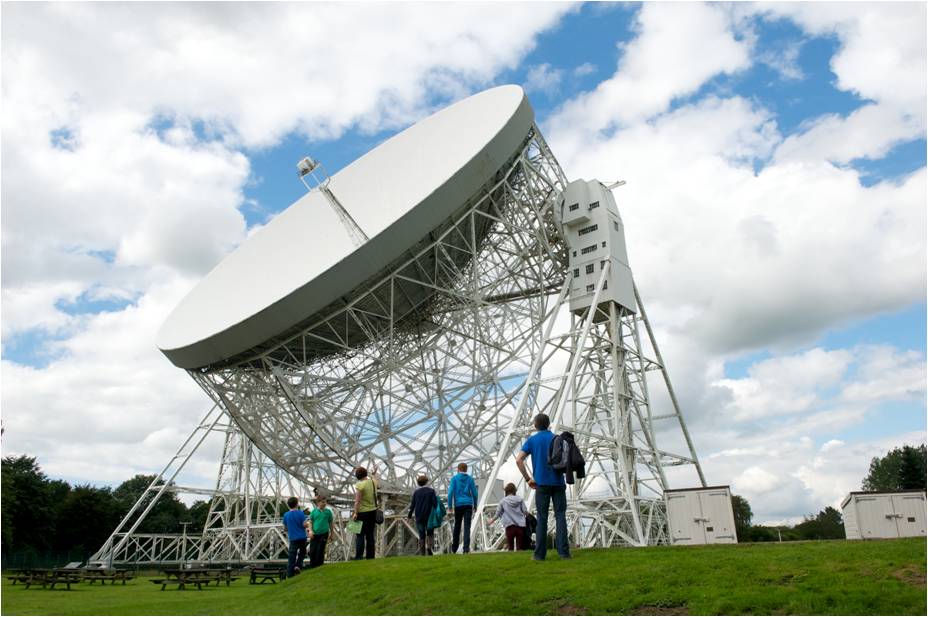 Big telescope observations related to gravity include examining how objects like planets and stars move in space and the way light bends around massive objects like galaxies. This is still an open area of research as there are many mysteries in the universe, such as dark matter, dark energy and some ideas of Einstein. The answers to some of these mysteries may force us to update our current ideas of gravity.

The lesson plan is presented in three sections: Gravity on Earth, Big Telescopes and Gravity in Space. Depending on the length of lessons in your school, these could be delivered as a single lesson or split into a series of two or three separate lessons.

Download all the relevant documents of the lesson plan. Start with the ‘Gravity PowerPoint Presentation’ and carry out the following three parts (or a specific part) after each section of the presentation.

Within the first section of this lesson/series of lessons, your students will first learn about the classical force of gravity, put forward by Newton. They will learn the difference between ‘mass’ and ‘weight’, the equation that links the two and investigate the strength of gravity on Earth.

This investigation can be performed in two ways. The first is to directly measure the acceleration due to gravity, by measuring the acceleration of an object in free fall. The other is to measure the strength of gravity on Earth by taking measurements of masses hanging from Newton meters. 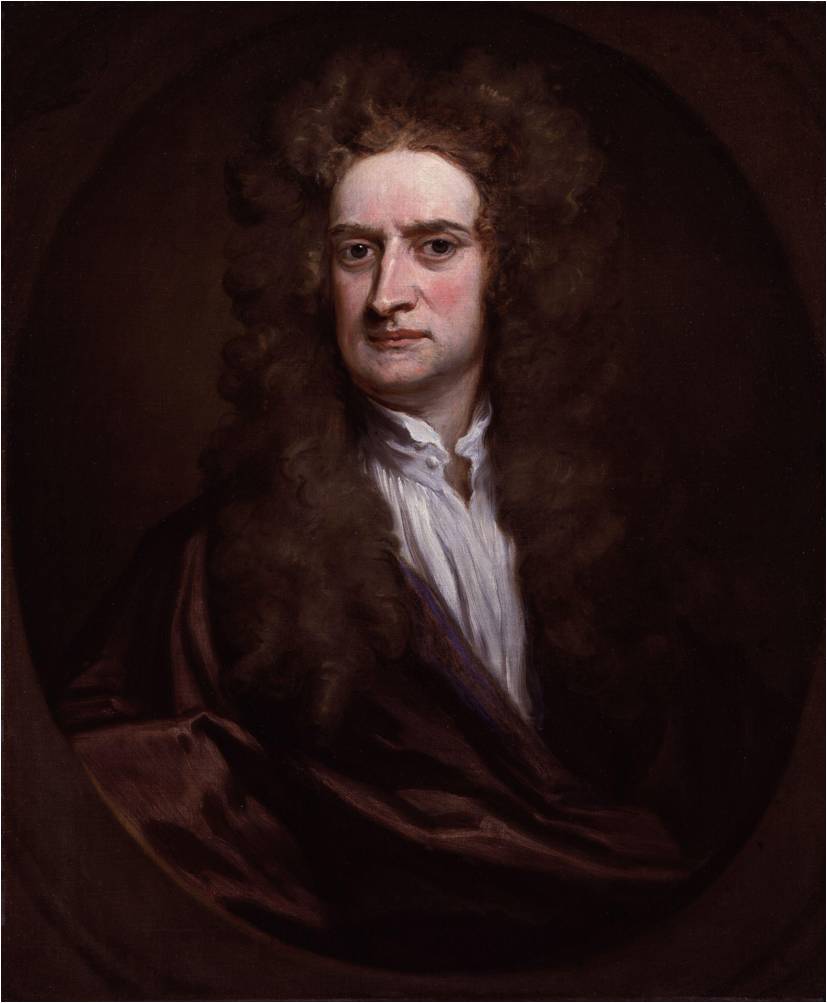 If you choose to run a free fall experiment, you may need to consider the following:
- We recommend the following equipment set-up for this experiment: data logging equipment, using two light gates (option A below). However, it is also possible to work with a single light gate and a stopwatch (option B below).
- Light gates are pieces of hardware. The data logging can be done with an additional piece of hardware (a data logger), or a piece of software running on a computer (to which the light gates are connected).
- The author recommends uLog as a relatively economical and straightforward option to use, though many more are available. uLog light gates can be connected to a laptop or PC via USB, and they come with easy-to-use software.
- Your light gate(s) will need to be mounted onto a clamp stand. Most light gates come with an attachment to do this.
- Choose suitable objects to drop: smaller, denser objects work best as they are less affected by air resistance. Also, the objects will likely need to be a regular shape, e.g. a square. Please check what your data logging software recommends.
- The data logging software will help your students to collect a high number of results. However, many of these results may be highly inaccurate, e.g. if the dropped object only falls through one light gate and misses the second, or falls at an awkward angle. To enable students to record successful and unsuccessful readings, we have provided a Data validity worksheet. By referring to this sheet for analysing their results, students can ignore their unsuccessful readings from the calculation of the average.
- It may be possible to demonstrate that acceleration due to gravity is independent of the weight of the object being dropped (i.e. heavy objects do not fall quicker than light objects). This depends on students collecting good quality results in terms of accuracy. Provide students with a variety of objects of different weights, but similar sizes (exactly the same size if possible). For example, small blocks made out of wood or metal. However, ensure that the lightest objects are not light enough to be affected by air resistance. There should not be a correlation between weight and acceleration.

Depending on the equipment available in your school, it is possible to run a free fall experiment with one or two light gates. See more information on these options below.

B. Using data logging equipment with a single light gate

If you do not have access to connected pairs of light gates, another option is to use a single light gate and a stopwatch.

If you do not have access to the required data logging equipment for the above, students could also measure the acceleration due to gravity by measuring, using a Newton meter, the amount of downward force (weight) on masses of different sizes.

If light gates and data loggers are not available to you, students can measure the strength of gravity on Earth by taking measurements from masses hanging from Newton metres.

By hanging different masses from Newton meters and reading off the weight, it is possible to calculate the strength of gravity in N/Kg, from the equation strength of gravity = weight ÷ mass. Students may get a variety of readings from different Newton meters. They may also get different readings if the masses attached are too low to stretch the spring, or if they are so large that they overstretch the spring. This will give students the opportunity to identify anomalous results and calculate a class average. For a Newton meter experiment, we recommend a group size of two.

In the second section of the lesson, students are briefly introduced to some of the big telescopes around the world (and in space). They are also presented with some of the astronomical questions relating to gravity that are still being investigated by astronomers. 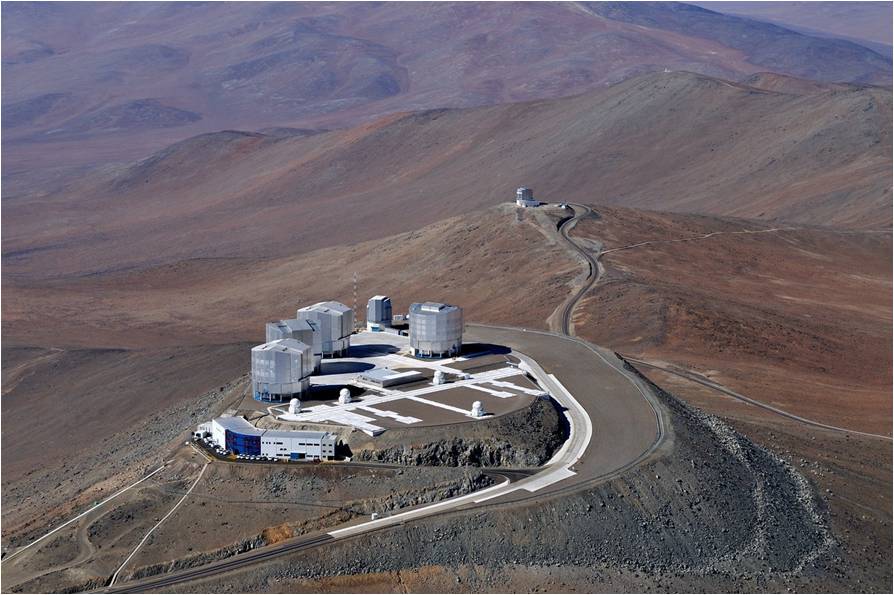 In the final section, students consider how gravity acts in space. They use a 3D model of gravity, similar to the model of general relativity put forward by Einstein, to better imagine the force of gravity and its effects. 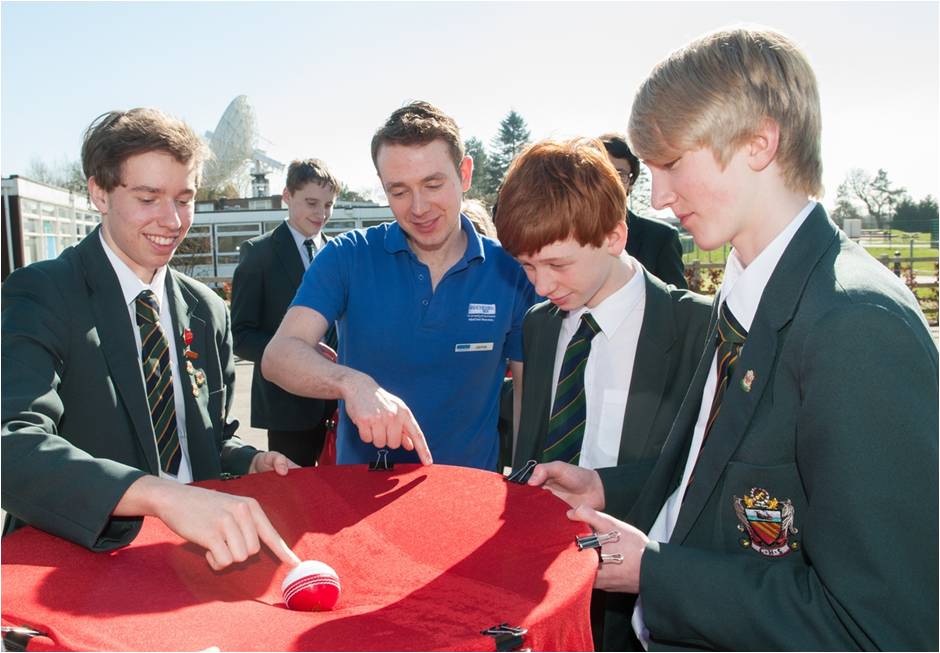 Students should draw an analogy between the stretched lycra and an object’s gravity extending outwards into space and gradually getting weaker as the distance increases. This will hopefully work towards dispelling the misconception that gravity is binary, i.e. that it is ‘on’ at the surface of the Earth and ‘off’ when in space.
This model actually represents the curved ‘spacetime’ of Einstein’s theory of general relativity, published in 1916. In this theory, Einstein proposed that mass bends the spacetime around it, curving and stretching space and time (as opposed to the perfectly flat space in classical physics). Objects, e.g. planets or particles or rays of light, travelling near massive objects such as stars and other planets follow the curvature of space, so their path bends around these objects. We perceive this change of direction as the force of gravity pulling them.
For this activity, we recommend a group size of three or four. An excellent (if very large scale!) demonstration of this activity can be found at:

Examples of things to try:

These are listed on slide 25 of the accompanying PowerPoint, but more information is given below.
1. Place a second weight onto the lycra. The two weights will be attracted together, if they come too close to one another.
2. Experiment with the strength of the ‘gravity fields’ around weights of different masses.
3. Try to get a planet (a smaller, lighter ball such as a marble) to orbit around a star (a larger, heavier weight):
a) By rolling the planet around the star. It’s possible to get one or two good orbits, but not many more. The planet will lose energy quickly and start spiralling into the star because of the friction of the fabric (there is no friction in space, so this does not occur).
b) By applying small rotations. First, apply a bit of pressure to the star to hold it in place. Now those holding the hula hoop can rotate it in small circles. This will provide the force necessary to overcome the friction of the lycra and cause the planet to roll around (in real space there is no friction, so no constant driving force is required). The gravity of the star will constrain the planet and keep it in orbit. If the driving force is too strong, the planet will overcome gravity and fly off out into space.
4. Try to get a planet to orbit two stars in the shape of the figure eight (you may have to hold the stars in place to stop them attracting together). Many stars exist in binary systems. The figure of eight also represents the path the Apollo missions took to get to and from the Moon.
5. Consider the similarities and differences between this model and real life (for higher-achieving students). This model excellently demonstrates the pull of gravity in one plane; however, in reality gravity acts in three dimensions. Also, this model has a lot of friction, so objects lose energy quickly.

All student materials used in this lesson/series of lessons are provided, including suggestions on how they could be differentiated for different abilities. At the end of sections one and three, there are review questions that assess the learning objectives of those sections.

Students perform an investigation to measure the strength of gravity on Earth, either by measuring the acceleration of a falling object or by using Newton meters to weigh masses. They learn investigative skills as well as Newton’s classic model of gravity. Then students explore how gravity affects objects in space, confronting the popular misconception that there is ‘no gravity in space’. A large hoop and stretchy material simulates the curvature of spacetime as in Einstein’s theory of general relativity. It is a fun exercise which will provide students a model of how gravity acts.