Call out a feature on the Sun (sunspot, solar surface, solar prominence) and ask the students to point it out on their diagram. For each feature give a brief description.
e.g.
- These are small, dark, cool areas on the Sun surface (Answer: sunspot).
- These are long loops of solar material held above the sun’s surface by a magnetic field (Answer: Prominence).
- We see light coming from this part of the Sun. It has a temperature of over 5000˚C! (Answer: solar surface) 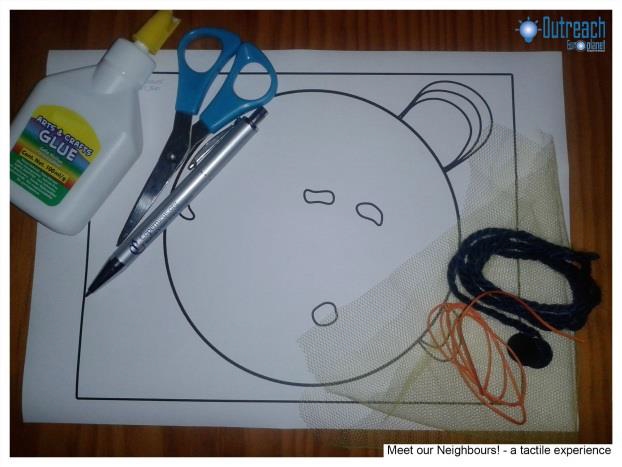 The Sun is a “yellow dwarf” star of average dimension and mass. Its diameter is about 1,400,000 km, which means that more than 100 Earth could be lined up along the Sun’s equator, and its mass is more than 300,000 times that of Earth. But compared to other types of stars, the Sun is quite average: the radius (mass) of the smallest type of stars, called “brown dwarfs”, can be as low as 0.05 solar radius (0.01 solar mass) whereas that of the largest type of stars, called “supergiants” or “hypergiants”, can reach 1000 solar radii (200 solar masses).
The Sun produces its energy from thermonuclear reactions taking place at its very centre, where the temperature reaches 15 million degrees. This process, which involves “burning” hydrogen and transforming it into helium, has been going on for the last 4.5 billion years and is expected to last about the same amount of time.

The surface of the Sun, called “photosphere”, is much cooler than its core, with a temperature of 5500°C. At certain locations on the photosphere, called “sunspots” the temperature is lowered by about 1000°C due to the action of the magnetic field which “punctures” the photosphere at these locations. This makes them appear darker than the surroundings. The spots always appear in pairs with opposite magnetic polarities. (the four irregular shaped areas on the tactile image).
The activity of the Sun can be measured by the number of spots appearing on the photosphere during a particular year. This activity varies periodically along a cycle of about 11 years. The last minimum occurred at the end of 2008 and the next maximum is expected in 2013-2014. However, between two consecutive cycles, the magnetic field reverses itself; so a complete cycle is actually 22 years long.

Other remarkable features of the sun are the “solar prominences” (loops of thin thread at the edge of the tactile image). They are actual bridges of matter between solar spots, shaped by the powerful magnetic field of the sun. Some of them can be lifted above the photosphere by as much as 350,000 km, which is almost the distance between the Earth and the Moon. They can also be completely disrupted by violent explosions before all the matter has time to fall back onto the surface, in which case some of the matter is sent flowing throughout the solar system.

The sun has an atmosphere, called the “chromosphere” because of its dark orange colour. It can only be seen during natural or artificial eclipses as a thin orange layer around the much brighter photosphere. Finally, above the chromosphere, lies the “corona”, a region containing very rarefied gas heated up to one million degrees by a process which is still poorly understood. Like the chromosphere, it can only be seen during eclipse as a shiny halo with bright streaks of hot plasma. 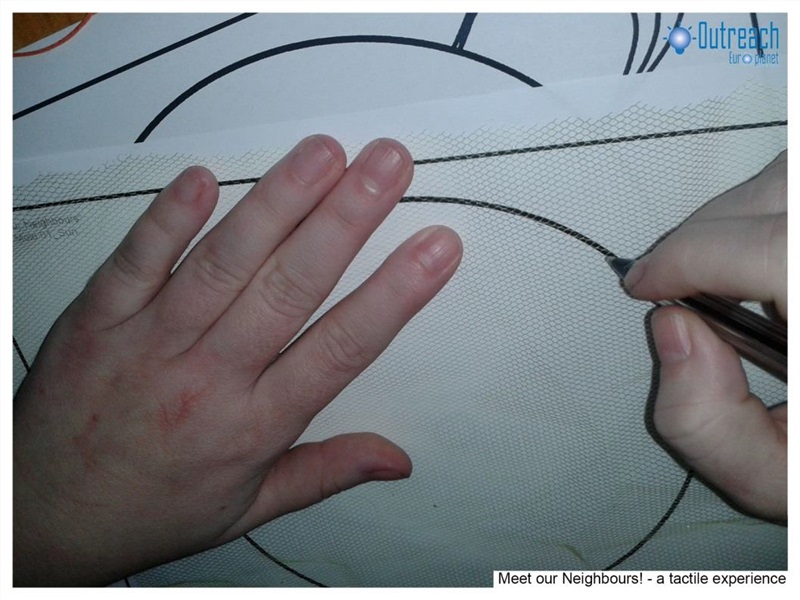 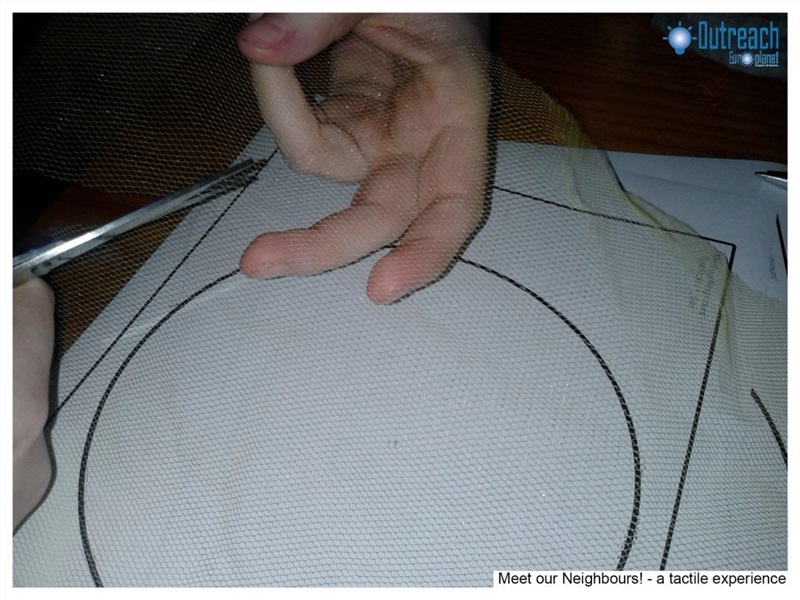 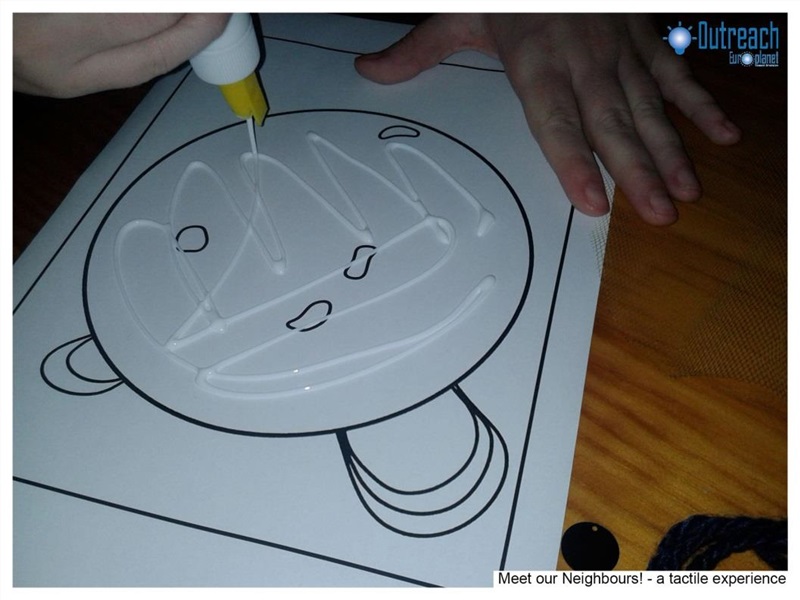 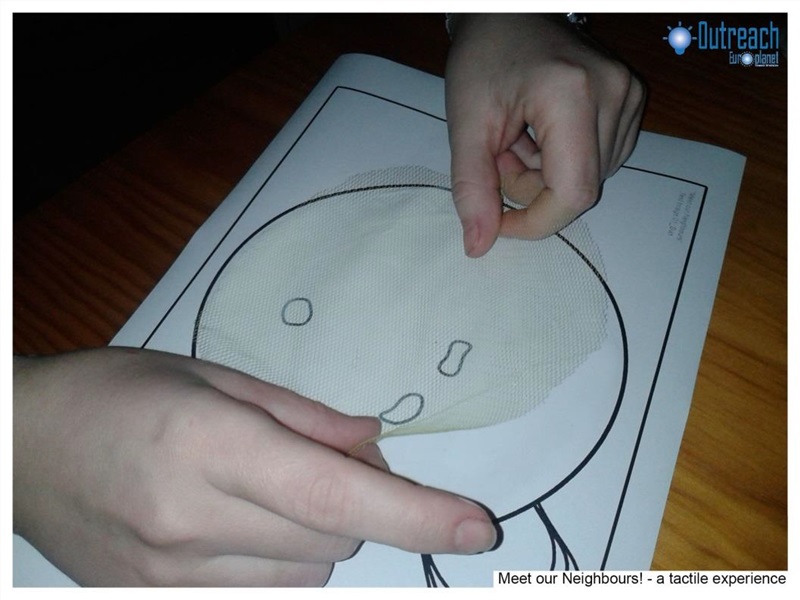 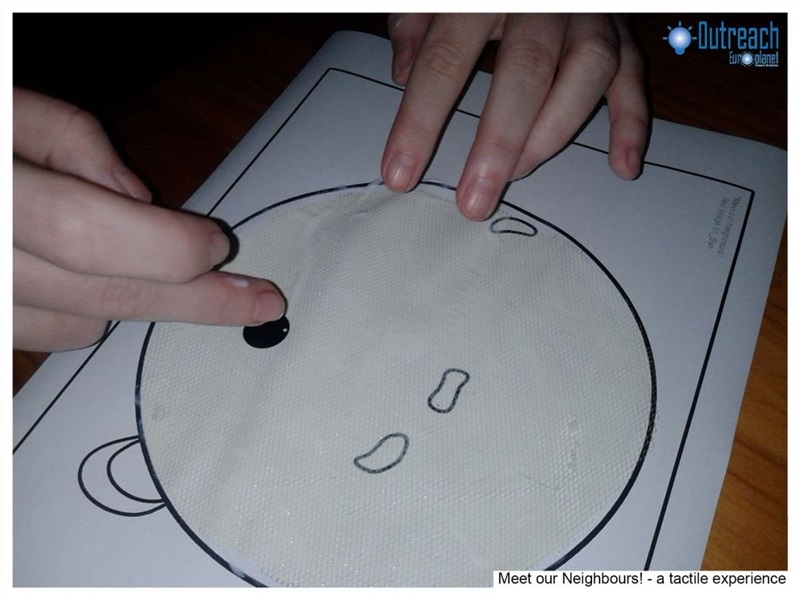 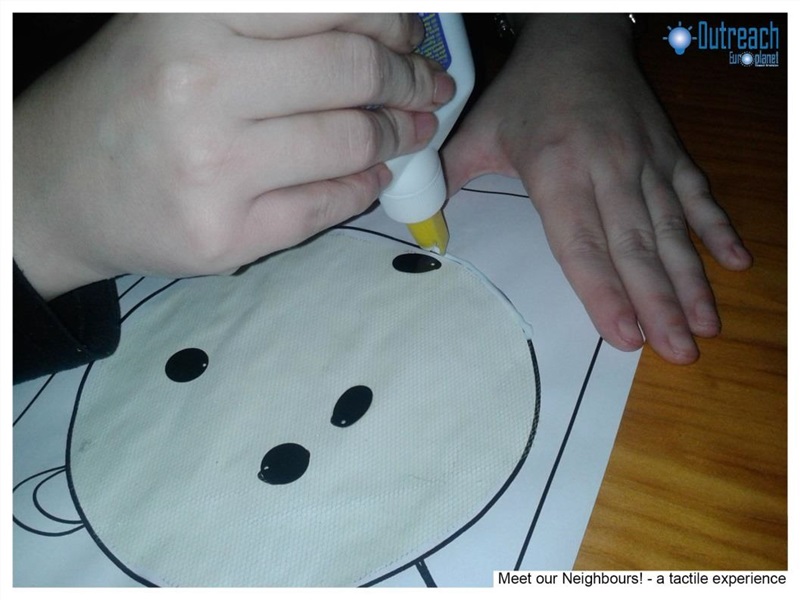 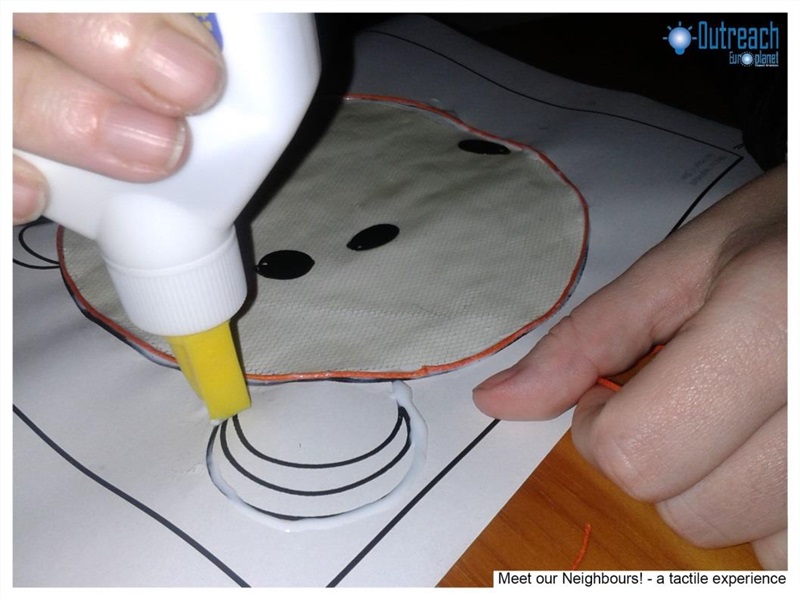 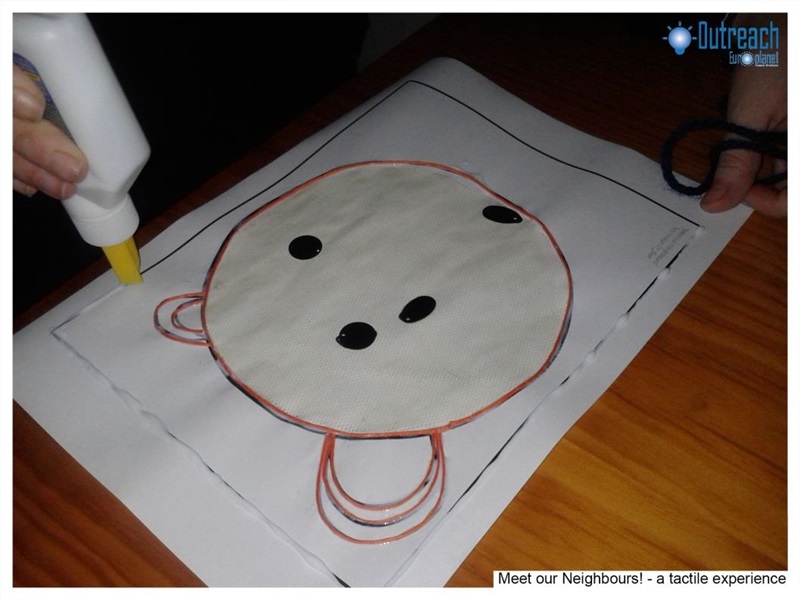 There are several ways in which you can explore the scientific content of the tactile schematic images. If you’re presenting the final tactile image to the students, first let them explore and feel the different textures. Questions will arise as students explore and it is important to guide them.
Read “Background Information” section to understand the different features present in the Sun’s schematic tactile image. 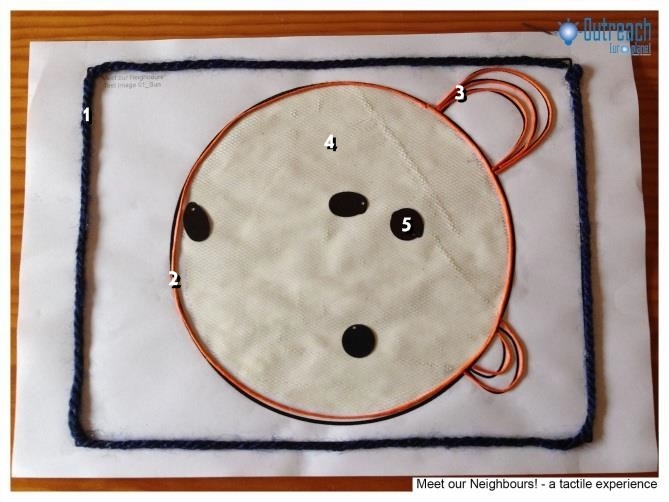 The star’s outer shape is outlined by a thin thread (2). Follow the thread until you find (3) the solar prominence.
The interior of the thin thread (2) is the fabric showing the sun’s surface (4). There are several sunspots (5) present.

Explore the solar system planets through “Meet Our Neighbours” in tactile form at http://nuclio.org/astroneighbours/resources/
Follow up discussion: How long does it take Sun light to travel to Earth? (take students outside during the day time to feel the sunshine). Answer: approximately 8 minutes (can be calculated from time= distance /speed = 150 million km / 300,000,000 metres per second = 150,000,000 m/300,000,000 m/s).

Activity concludes when students explore and experience the tactile Sun and are able to identify the characteristics of the Sun.