In Age that Crater! students will learn about the existence of craters on the Moon and on other planetary bodies and how they occur. They can also learn how to approximately age these craters, comparing them to other craters. This activity gives young students an introduction to phenomena occurring in the Solar System and on our own Earth. This activity is a student-driven inquiry process employing the Predict, Explain, Observe, Explain (PEOE) model, encouraging students to engage their education through self-drive inquiry and investigation. This activity is aligned with the Next Generation Science Standards (NGSS) for elementary and middle school students.

It is possible to qualitatively age craters on moon and planetary surfaces using images of the surface. This does not give the student a definitive age of when the craters occurred, but does allow the students to grasp the basic understanding that space debris will hit planetary bodies over a time and leave significant marks on the surface.

What is a Crater?

A crater is a depression in the surface of a planetary or lunar body. There are a variety of different type of craters such as those formed by explosions and volcanic activity. However, in this activity we are specifically focusing on craters produced by the impact of a meteorite or asteroid. This is called an “Impact Crater.” An impact crater will often have signs of that impact. Since this happens at high speeds and creates large amounts of pressure forcing the material in the ground downward there will be destruction in the immediate area and signs of debris.

How do Craters Form?

According to NASA, “Impact craters are formed when impactors such as meteorites smash into the moon's surface. The factors affecting the appearance of impact craters include the size and velocity of the impactor and the geology of the surface.” However, craters may occur on any planetary body, including other planets like Mercury or Mars and other planets moons such as Jupiter’s moon Iapetus. Additionally, craters even occur on planet Earth. For more about craters and to see how they are created, see this hands-on activity presented by NASA https://www.nasa.gov/audience/foreducators/topnav/materials/listbytype/Impact_Craters.html.

Asteroid – Rocks floating around in space. Some are the size of a pick-up truck. Others are hundreds of miles across.

Crater – A large, bowl-shaped dent in the ground. They can be caused by an explosion or the impact of a meteorite.

Meteor – The streak of light caused when a meteoroid enters a planet’s atmosphere and starts to burn from the heat of friction.

Meteorite – A meteoroid that lands on the surface of a planet.

Meteoroid – A little chunk of rock in space smaller than a pick up truck. If it were bigger, it would be an asteroid.

Planetary Body – A large body in outer space that circles around the another star, but may not yet be classified as a planet.

Planet – A large body in outer space that circles around the sun or another star.

Materials Setup (Before the activity starts) 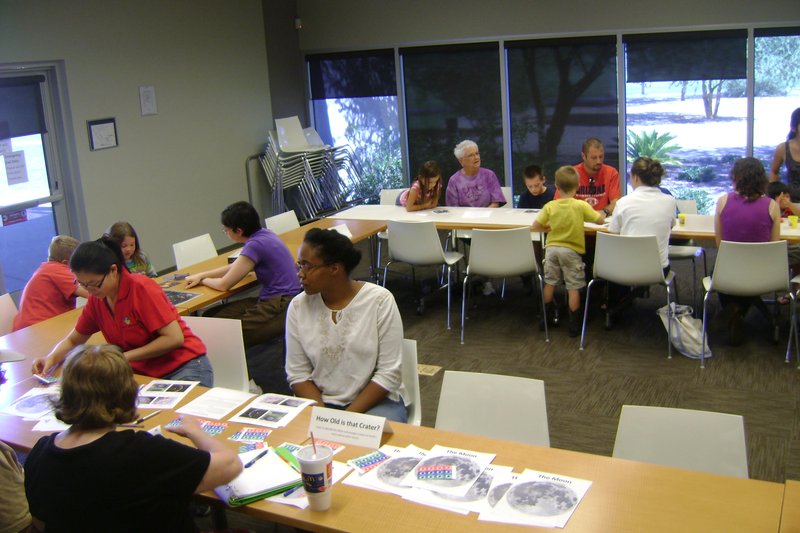 Students will be asked to predict how the Earth and Moon are similar and different to other planets and moons in our solar system. This will initiate discussion which will lead to the differences between the presence of craters on the Moon and the Earth. Some students may not believe or know that there are craters on Earth due to the fact that Earth’s atmosphere and composition allows for these features to be quickly changed and lost.

The teacher will then put up pictures of the Earth and the Moon as well as other planets and moons, without explaining which are which (see 2205_astroedu_images.pdf). The teacher will allow the students to observe the various pictures and make guesses about whether they are other planets and moons or our own Earth and Moon. (correct answers are in 2205_astroedu_crater_determination.pdf).

One major difference that should stand out is the presence of craters. Students should notice that there seem to be many more craters present on the Moon and on other planetary bodies. This may be expanded into an additional PEOE scenario or the teacher may choose to directly explain how the presence of an atmosphere, the elements, plant life, etc. changes Earth’s surface so that craters are less likely to be preserved for long periods of time on Earth. 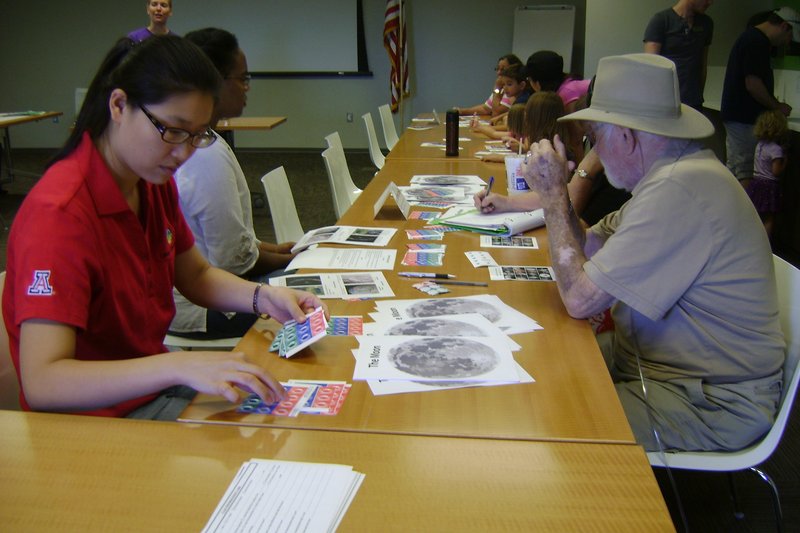 Before giving the students instructions for the next step the teacher will ask students to predict how they will be able to tell the ages of the craters. The teacher should have the students write down their ideas for what features will tell them the difference between a new crater and an old crater.

Next, the students will be asked to explain the various reason they chose for how to tell the age of the craters. There can be multiple answers for this that are correct, but this activity will teach the students how to qualitatively age craters based on craters relation to other craters on the surface.

After all the stickers have been placed the students should be asked to observe their moon-surface and compare them to the images that they’ve observed of other planetary bodies.

What do they notice about their own moon’s surface and the pictures of the other planetary bodies? Similarities? Differences?

Please note: The students may place the stickers however they like, but the students should be given enough stickers that it becomes impossible for them to not have to overlap stickers of different colours.

Additional Note for Teacher Guidance: The teacher should keep in mind the goal of leading the students to discover that if you have three craters that are overlapping you can observe and conclude the one on the bottom is the oldest and the one on the top is the youngest, while the middle crater happened sometime between the other two. This does not present exact ages or times between occurrences but can lead to the discovery of relative and general timing of occurrences between each crater relative to the others.

After the activity students should be able to look at any pictures of planetary bodies and be able to identify the craters and the and qualitatively age them. To test this understanding a teacher may want to supply a number of different pictures of real moons and planets and ask the students to identify and qualitatively age the craters on the surfaces of the planetary bodies.

According to the NGSS standards:

- ESS1.B Earth and the Solar System: The solar system consists of the sun and a collection of objects, including planets, their moons, and asteroids that are held in orbit around the sun by its gravitational pull on them. (MS-ESS1- 2),(MS-ESS1-3)

- MS-ESS 1-1 Patterns: Patterns can be used to identify cause and effect relationships.

- MS-ESS1-2 Systems and System Models: Models can be used to represent systems and their interactions.

- MS-ESS1-3 Earth's Place in the Universe: Analyse and interpret data to determine scale properties of objects in the solar system.

Connections to Nature of Science: Scientific Knowledge Assumes an Order and Consistency in Natural Systems. Science assumes that objects and events in natural systems occur in consistent patterns that are understandable through measurement and observation.(MS-ESS1-1),(MS-ESS1-2)

Additional activities are available to expand the learning through the use of an activity sheet or through teacher-created challenges for the students to apply their new knowledge to other planetary bodies in the Solar System. Additionally, this activity may lead into classroom or outside-classroom use of the Zooniverse’s Moon Zoo online activity.

What is an Impact Crater? https://spaceplace.nasa.gov/impact-crater/en/
Offers a short explanation and pictures of multiple types of impact craters. Pictures include 1) Earth: Meteor Crater, 2) The Moon, Tycho Crater, 3) Earth, Vredefort Crater

Where did all of Earth’s craters go? https://spaceplace.nasa.gov/craters/en/
An explanation for why we do not see craters on the Earth as prominently as we do on the Moon.

https://www.lpi.usra.edu/education/explore/shaping_the_planets/impact-cratering/
A detailed website with explanation, glossary, and images of craters.
This site offers additional background that the teacher may find useful when preparing the lesson based on the level of detail he or she would like to go into.

https://airandspace.si.edu/exhibitions/exploring-the-planets/online/comparing-planets/impact.cfm
Additional images and explanations that detail different impact craters that occur on the Earth, the Moon, the planets, and even asteroids.