Build a sundial and discover how time can be measured.
Space Awareness, Leiden Observatory

Students build a sundial to measure time. They explain how a sundial works with sunlight. They tell the time using a sundial and compare the accuracy and precision of this method with modern ways of telling time.

After implementing the activity, students will be able to: * name different instruments used to tell the time; * explain how a sundial works with sunlight;
* demonstrate how to tell the time using a sundial.

The Sun is a star, a ball of burning gas that emits light and heat. It is a rather ordinary star, not particularly big or small, not particularly young or old. It is the source of heat that sustains life on Earth, and controls our climate and weather. It is the closest star to Earth, and the most closely studied. From it we have learned a great deal about the physical processes that determine the structure and evolution of stars in general.

Looking directly at the Sun, even for a brief moment, is a bad idea — our eyes are very sensitive to its light. Even in the dark, at least when there is only the tiniest amount of light, your eyes still manage to detect things. So imagine what happens when you focus all that bright light from the Sun on a tiny area like the eye. The light detectors at the back of the eye get burned. Unfortunately, unlike a sunburn on your skin, your eye probably won’t recover and you could lose your sight.

If you would like a very visual demonstration of how damaging the Sun can be, have a look at Stuart Lowe’s astronomy blog http://www.strudel.org.uk/blog/astro/000347.shtml. He has made a video of what happens when a grape is put up to the eyepiece of a telescope that is pointed directly at the Sun, with no filters. Very quickly the grape begins to blacken and burn. The eye is much more delicate than a grape so the demonstration is quite a powerful reminder to be careful when looking at the Sun. So, please, no matter what, do not look directly at the Sun.

During the daytime we notice that time passes by because of the Sun in the sky. Because the Earth completes a rotation on its axis in one day, the Sun appears to rise in the East at the beginning of the day, climb high at noon and then disappear into the horizon in the evening in the West. Babylonians observed this movement of the Sun and constructed the sundial, which was the first version of a Wall clock or a hand watch. Using sunlight and the sundial, the Babylonians divided the day into hours.

Different types of sundial exists. The shadow can be cast on the ground, creating a horizontal sundial, or it can be cast on a wall, creating a vertical sundial. The lines showing the hours will be different depending on the latitude of the location. If you use a sundial at the north pole in summer, hourly marks would have a separation of 15 degrees. One day equals 24 hours, and one rotation divides into 360 degrees. Therefore, 1 hour on a sundial is represented by 15 degrees of rotation.

An equatorial sundial has a dial plate parallel to the Earth’s equator. The gnomon should be perpendicular to the dial plate so it is inclined at an angle equal to the latitude of the observer and points towards true north. The hour lines are spaced at 15 degrees. 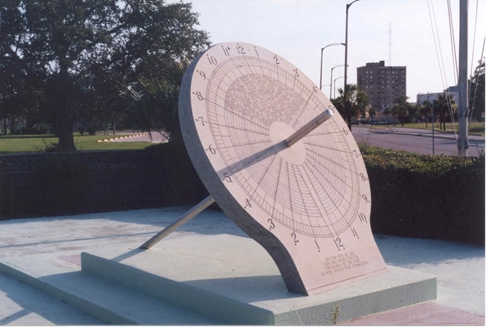 For the activity ‘The large sundial’, you will need a playing field that is in sunlight most of the day.

What time is it?

Ask if any of the students are wearing a watch. Why is it handy to have a watch? Explain that 600 years ago nobody had a watch. Ask how the people back then knew what time it was. Before the mechanical clock was invented, it was much more difficult to know the time of the day. People found out that they could use the Sun to tell the time. They did this using a sundial.

Tip. Long ago people also used other devices to tell the time, such as an hourglass.

Have any students ever seen a sundial? Do they know how it works? Explain that a sundial has a stick or pointer that makes a shadow. This is called the gnomon. It is important that in the Northern Hemisphere, the gnomon always points north, or you will not be able to read the sundial. Explain that the Earth turns on its axis. This means that the position of the Sun with regard to the Earth is always changing. If necessary demonstrate this using a torch and an orange or globe. Explain that the shadow of an object also changes as the Earth rotates. The sundial uses this fact. By looking at the position of the shadow of the gnomon on the sundial, you can tell what time it is.

Good to know. When the Sun is due south and the shadow is pointing to the north, it is noon. That means it is exactly 12 o’clock in solar time. Solar time is not always exactly the same as the time shown on your watch. That is because the time we use today is not based on the Sun’s actual position in the sky. 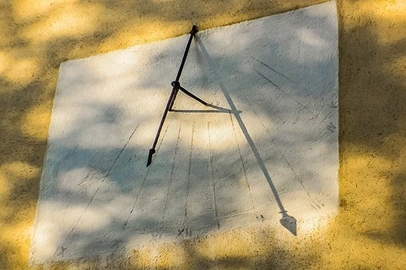 Hand out scissors, glue, and the activity sheet.

Important: To calculate the angle for the gnomon, you need to know the latitude of your town. You can look this up in an atlas or on the internet. For example the latitude of London is 51 degrees N, so the angle needed for a sundial in London is 51 degrees. The instructions are on the worksheet. When the sundial is ready, the students should put it somewhere with the arrow facing south.

The students read the time shown by the sundial. Can they see what time it is? The students complete Task 1 on the worksheet. Discuss the tasks. Come to the conclusion that today we always know exactly what time it is because there are so many clocks around us. Long ago, when there weren’t any watches and clocks, it was much more difficult to tell the time. And of course they could not use a sundial at night!

Good to know.
This sundial is based on GMT+1. This may need adjusting depending on your local time. For example, in the UK, this would match British Summer Time, but for wintertime every hour number would need to be one hour earlier. So 12 would be 11, 1 would be 12, etc. If you are making it in Central European Summer Time (GMT+2), you will need to change the numbers. Every hour number will need to be one hour later. So will be 1, 1 will be 2, etc.

The large sundial at least

Make a large sundial with the students. Take the students outside to a location where the Sun shines most of the day. Mark the direction of north, using a compass if necessary.

Stand the large protractor upright on its long side in the grass. Use it to measure the correct angle to the ground, as described above. Stick the stick firmly in the ground at the chosen angle, facing north. See the picture for how this should be done.

Every hour the students place a large stone on the ground where the shadow of the stick falls. One of the students uses the marker pen to write the number of the hour on the stone. You can use the smaller stones to mark the quarter and half hours. 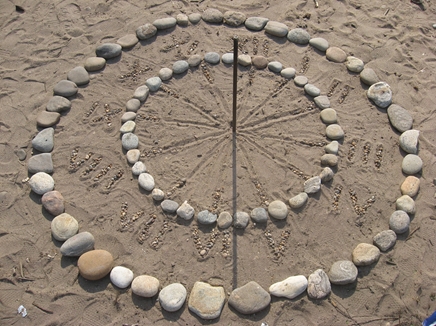 If you don’t want to take the students outside every hour, you can just place two stone markers, one in the morning (for example at 9.00) and one in the afternoon (for example at 14.00). Of course your sundial will be less accurate.

To finish the sundial, the rest of the day after school-time needs to be divided using the stones. In the example shown below, five hours have passed and so the time in between needs to be divided into five. Encourage the students to write the numbers of the hours on the stones and place them in the correct position. The next day, take the students outside to see if they can read what time it is. They compare the time they read on the sundial with the time shown by a watch. 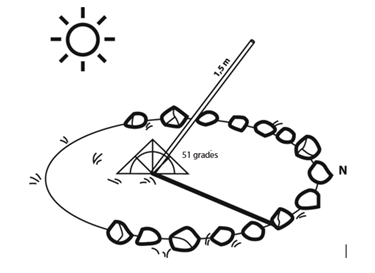 How accurate is their sundial? Discuss that long ago, it was more difficult and less precise to tell the time than nowadays.

In this activity, students discuss the notion of time and how time can be measured. They build and use a sundial. The activity allows students to learn that you can tell the time using the Sun with a sundial and discover that a long time ago, it was much more difficult to tell the time than it is today.