What is a Constellation?

Students illustrate the three dimensional aspect of an object by acting out an object in space in a team. They demonstrate that we see a three dimensional object differently from various perspectives. Students apply this knowledge to constellations. 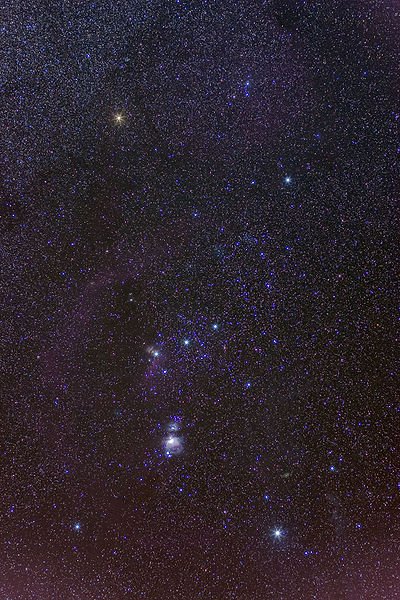 What is a constellation?

Constellations are imaginary patterns that farmers, poets, navigators, or astronomers invented to easily identify stars. Stars are big balls of burning gases that emit light and heat. During the day, the light coming from our closest star, the Sun, is too strong to see the other stars. During the night, when it is very dark, we can see from 1000 to 1500 stars. It would be very hard to tell which star is which by looking just at one! Constellations, with their familiar shapes, help localise stars and allow us to find our way through the night sky. There are 88 constellations, adopted by the International Astronomical Union, across the sky between the northern and southern hemispheres so some constellations are only visible in one hemisphere. Stars belonging to a constellation are not on the same plane and can be at various distances from the Earth. Changing our position in the galaxy would change the relative positions of a group of stars, so we would see different constellations.

See how the night sky would appear from a different part of the galaxy: http://nautil.us/issue/19/illusions/a-quick-spin-around-the-big-dipper https://www.youtube.com/watch?v=lD-5ZOipE48

Origin of the Constellations

Ever since people first wandered the Earth, great significance has been given to the celestial objects seen in the sky. Throughout human history and across many different cultures, names and mythical stories have been attributed to the star patterns in the night sky to more easily remember and recognize them, giving birth to what we know as constellations.

Constellations were used by people for many practical reasons. For example, in agriculture, constellations could help determine when the seasons were coming before the birth of calendars. Constellations also helped navigators and explorers to find their way across the planet. These activities fastened the discovery of new constellations. Nowadays, astronomers still use the names of constellations to explain where a celestial object can be found in the sky.

Introduction to the constellation of Orion

Orion is a constellation that has the shape of a man and is made of 7 main stars. It has been observed and drawn since prehistoric times. The name ‘Orion’ derives from Greek mythology. Orion was a gigantic, supernaturally strong hunter of ancient times.

How do astronomers calculate the distance to a star?

Astronomers developed two methods to determine the distance of a star. The first one, known as parallax, uses triangulation. Astronomers observe the position of a star on one day (position 1 in the drawing below) and again six months later (position 2 in the drawing below). They can see the angle formed with the star and the Sun. Knowing that the diameter of the Earth’s orbit around the Sun is about 300 million kilometres, astronomers use trigonometry to calculate the distance. This technique works for stars within about 400 light years of Earth. 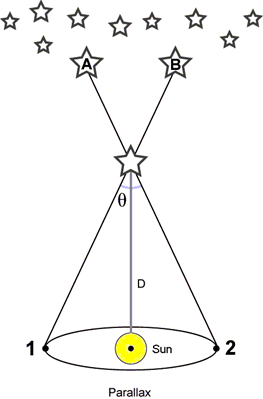 For the activity, move all the tables and chairs to the side of the classroom so that the students have plenty of room to act out a geometric shape. You could also use the gym or the playground. To make a constellation prepare containers for each pair of students, each containing glow-in-the-dark modelling clay, corrugated cardboard, 7 wooden skewers, 4 corks, a ruler, glue, scissors, and a waterproof marker. Cut the corks in half, ready for the students.

Organise the students into four groups of six students. Send each group to a different corner of the room. Each group chooses a geometrical shape to act out together. They hold hands and stand in a triangle, a square etc. Explain that they are not allowed to choose a circle.

The coordinators draw the side views of their shapes on paper. Students discuss the drawings in their group then with the class and teacher. What do they notice? Does the shape change if they look at it from a different side? Why? Ask the students if they think this is also true for constellations.

You can ask students to explain why you told them not to choose a circle to test if they understand perspective.

Introduce students to the Orion constellation. Show students the picture of Orion in a bright sky and the drawing showing how we represent the constellation from the Earth in two dimensions. 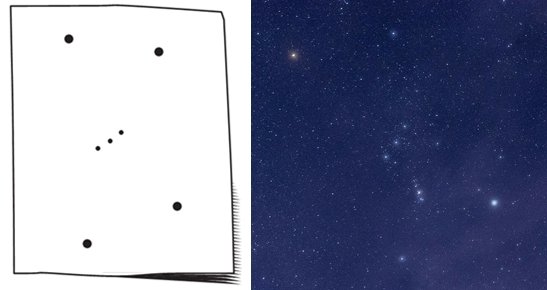 Discuss with the class the position of stars in the constellation. Do they think the stars are on the same plane? Imagine that we could travel to another planet far, far away, would we make the same drawing? What does a constellation look like when seen from different sides?

Students make a constellation and demonstrate that what we see in the sky depends on our position.

See step 16 of Task 1 on the worksheet for tips for the students if they cannot see their constellation clearly.

Not on one line

If they could travel through space to another planet very far away from the Earth, with a different perspective on the constellation, could we see the same patterns at night? Why?

To introduce constellations to students, you can use the resource ‘Make a star lantern’ (astroEDU and Space Awareness repositories).

Through a hands-on practical, students learn what a constellation looks like by understanding that a three-dimensional object looks different depending on our perspective. They learn that the stars in a constellation are far apart and not in the same plane.