Star in a Box: High School

Explore the life-cycle of stars with Star in a Box activity.
Edward Gomez, LCOGT

The accuracy of their answers to the question can form the basis of the evaluation of students’ understanding. However, more detailed feedback can be obtained by talking to individual students about their understanding.
- Ask students to talk through what is happening to a 1 solar mass star as the star marker moves around the graph.
- Ask students why different initial masses of star lead different life cycles; what are the main differences and happens at the end of these stars lives?

Star in a Box app is available at http://starinabox.lco.global 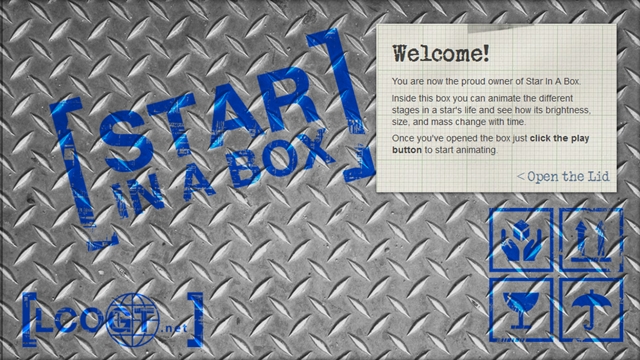 The Sun’s Evolution during its lifetime.

Click the play button below the Hertzsprung-Russell diagram to show the Sun’s evolution.

Use the table below to describe the changes the Sun will go through between stages.

Follow the evolution of five stars of different masses.

Complete the table below, filling in a row for each of the different masses.
Hint: You may find it easier to use the data table on the ‘Star in a Box’ to find the exact values.

Study the data for the different stars in your table above.

The Spanish version of “Star in a Box: High School” translated by Mariana Lanzara, proofread by Pau Ramos and reviewed by Dr. Amelia Ortiz-Gil for the Astronomy Translation Network project. Download the files: http://astroedu.iau.org/media/files/Spanish_Star_in_a_Box_Highschool.zip

The activity finishes when the students have completed the worksheets. The teacher should discuss the range of answers the students had for some of the later questions on each worksheet.