After implementing the activity, students will be able: * to identify a map and classify different elements on it, like mountains, oceans, cities, rivers, main roads, etc.; * to identify the map scale and the cardinal points, and the significance of these concepts when reading a map; * to sketch a map from an aerial photograph of their country or city; * to identify some elements related to the geography of the country; 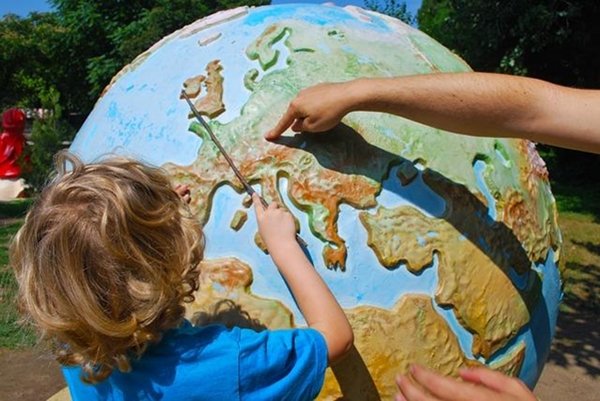 There are four cardinal directions or cardinal points: North, South, East, and West, denoted by the initials N, S, E, and W, respectively. On a map, it is common to indicate only the North direction. Cartographers defined the cardinal points and draw maps with the North at the top by convention.

Cardinal points provide a systematic way to tell someone where places are. In cultures that do not descend from European traditions, the cardinal directions could be shown with colours or numbers.

There are many ways to find the cardinal directions: some use the sun or stars, others the magnetic properties of the Earth (e.g., a compass). Today, satellite navigation (GPS) is widely used.

Cartography is the study and the creation of maps. Humans have been creating and using maps since early ages in its history but the oldest map that has survived over time is a map of the Babylonian city of Nippur. The technologies used to create maps have evolved a lot since their beginnings.

Mapping started with manual constructions and gradually used new techniques and tools like the compass, telescope, and sextant, increasing the accuracy of maps. In the 20th century, aerial photography and satellite imagery tremendously improved the mapping of physical elements such as buildings, roads, rivers, etc. More recently, GPS can perform direct mapping.

A scale is a ratio that compares a measurement on a map (or figure) to the actual distance between locations identified on the map (or figure). It's the mathematical relationship between the length or figurative distance on the map and the actual length of the represented distance. Scales have no units. A scale is represented by an ordinary fraction (such as 1 / 1 000 000) or a mathematical ratio (1: 1 000 000). The number 1 means the unit on the map (1 cm) and number 1 000 000 the actual size (1 000 000 cm is about 10 km).

A map is a simplified representation of populated areas, geographical features, roads, rivers, continents, and oceans. In addition to maps of the Earth and its countries, a city plans or ordnance survey charts are also types of map. In the past, maps were drawn using a compass, an astrolabe, and a tape measure. Nowadays, they are charted using aerial photography and GPS.

Per student: * "An aerial picture of your city. You can find aerial pictures of many cities on the ESA website (http://www.esa.int/Our_Activities/Observing_the_Earth/Image_archive) or Google Earth (www.google.com/earth/ or Google Maps (www.maps.google.com) * Tracing paper * Ruler * Optional calculator

A world map showing the continents and the sea beds in relief. The blue represents the sea. Dark blue represents the deeper ocean beds and light blue the shallower beds. The continents are shown in yellow and the darker areas are the contours. The positions of the Equator, the Greenwich meridian, the Tropics of Cancer and Capricorn, the Arctic and the Antarctic Circles are shown on the map. 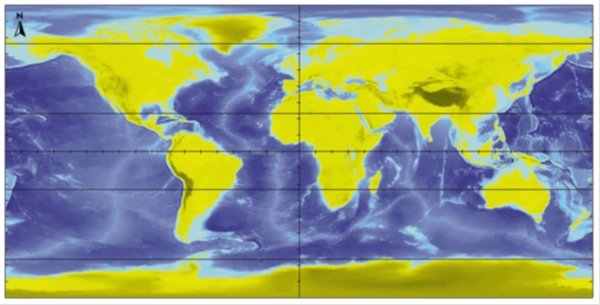 What do you see on a map? 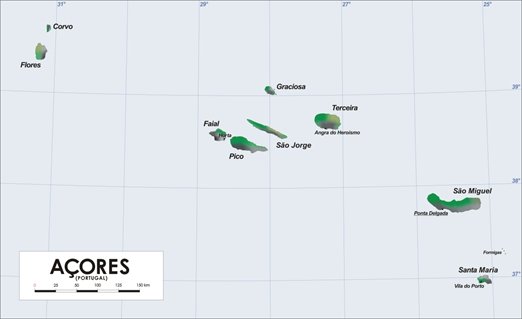 Ask students how we could find out where all the countries in the world are or how do we know the way if we want to travel somewhere new. We use a map: mobile applications and GPS are all based on this concept.

Ask students to look at the map or the globe. Ask them to describe what they see and encourage them to explain what they think different colours represent on the map.

Divide students into small groups. Distribute one map per group and several stickers or labels. Ask the group to write down “mountain”, “ocean”, “[your country]” and to stick the label to the corresponding feature on the map.

Ask students if they see the differences in the colour blue. Ask them if they know what dark blue refers to. Explain that they show the mountains on the sea bed. As an example find the Azores archipelago and notice how they all form part of a chain which rises out of the sea bed and crosses the Earth from North to South.

Using the stickers on the maps, ask the students to localise the different elements relative to each other using different cardinal points. E.g.: Atlantic Ocean is west of Europe?

Ask students to consider how we might define a particular location on a map. What are the issues involved? The cardinal points help us to describe an object's location relative to another but to be more general and precise, we need a system of reference. We define a grid with grid lines at specific locations and their direction defined using the cardinal points. This allows us to define a location on Earth using longitude (giving the east to west position from the Prime Meridian) and latitude (giving the north to south position from the Equator).

How to build a map? Aerial photography. 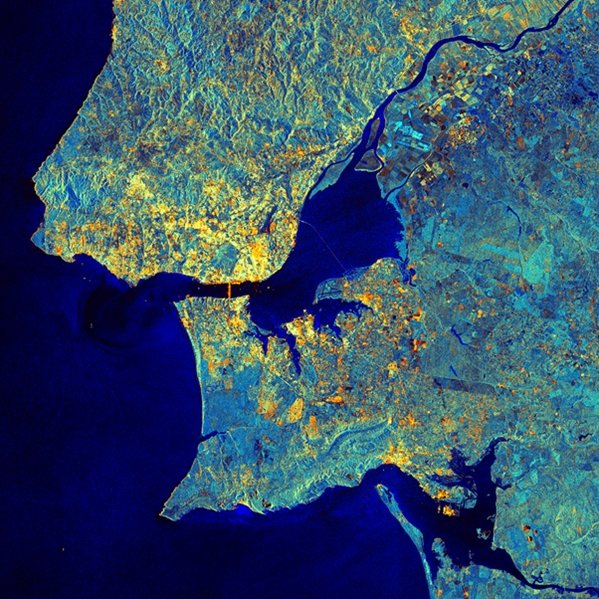 Distribute the aerial photographs of your city. Ask students to recognize different elements in the photo like buildings, sea, rivers, etc. You can ask students if they can locate some known places on the map like your school. Identify the scale and relevant features.

Distribute tracing paper to students and ask them to copy the picture. Students draw a map of this area and identify what they think are the relevant features. For example, rivers, bridges, roads, etc. Students lay out their own map.

Explain that this is how modern maps are made. Aerial photographs are taken with balloons, planes or other flying objects, and the different elements in the photos identified.

You can ask students if they know any other device that allows us to see aerial photographs. Ask students if they have seen a GPS. Explain that some objects fly even higher than airplanes around the Earth. These objects are called satellites; they are so high that they need to fly on a rocket to space. Satellites watch the Earth and send us very precise information about locations on the planet, an object's longitude and latitude.

Teachers can check to see if students have correctly labelled features of their maps, as listed in the learning objectives, and if students have identified the important features to include in their own maps, including cardinal points and a scale.

Check if students understand how distance is represented on a map. Ask them to calculate the distance between two objects using the scale. Students can present their maps in small groups or to the whole class to show the features they included.

Invite each group to present their work through a short video or a presentation.

Nowadays, maps are charted using aerial photography and the Global Positioning System (GPS). This may be linked to talking about the importance of satellites and about its uses in our everyday life.

Land and offshore surveying were some of the first sectors to exploit this new technology. Ordnance Survey uses GPS for the majority of its surveys to provide national mapping infrastructure.

What is satellite navigation? Source: http://www.esa.int/Our_Activities/Navigation/About_satellite_navigation2

Since the beginning of time, human beings have looked to the sky to determine their whereabouts. Traditionally, the Sun and the pattern of fixed stars have been their guides. But in the second millennium, constellations of man-made satellites have taken over as beacons to guide the way.

Using the ‘fixed’ stars, you can determine your position anywhere on the Earth’s surface to within a few hundred metres, provided the weather is fine. But navigation satellites can tell you where you are to the nearest few metres or better, whatever the weather. Enhanced instruments can even pinpoint the position of a stationary object to within a few centimetres by measuring the object’s position many thousands of times over several hours and then working out the average of the measurements. The European Space Agency's (ESA’s) Galileo mission is a new generation of European navigation satellites, launching in 2016.

In this activity, students familiarise themselves with the concept of a map. They observe, discuss, and draw a map. They learn how to identify different elements on a map like mountains and oceans. They learn that each map has a scale and cardinal points. They learn how modern maps are made using aerial photographs or GPS.