Students will understand the scale of Solar System in terms of relatively well-known sizes and distances on Earth.

Questions for the instructor to ask themselves to evaluate the student learning: 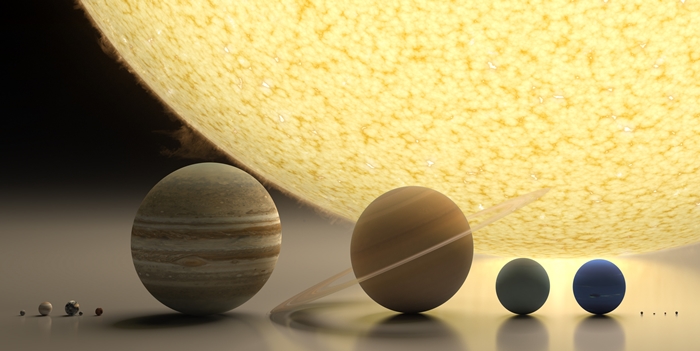 Sun and planets in the solar system: (teachers are encouraged to share these information while conducting the activity)

Other bodies: * The Moon is Earth’s only natural satellite and it was visited for the first time by the Apollo 11 landing mission in 1969. The dark and relatively featureless lunar areas that can be clearly seen with the naked eye are called maria, which are known to be the result of ancient balsatic lava.

Astronomical unit (au):
Is a unit of length, approximately the distance between the Earth and the Sun, astronomers use to describe the great distances in the Solar System.

In a scale model, all linear distances and sizes are enlarged or reduced by a scaling factor. The scale factor is given by;
scale factor = true value/reference value

For example, when scaling the Solar System, the diameter of Earth and the reference size (in this case is a peppercorn of 2 mm) could be used as the true and reference values, respectively. In order to scale the rest of the planets, their true sizes and the scale factor calculated above are used: 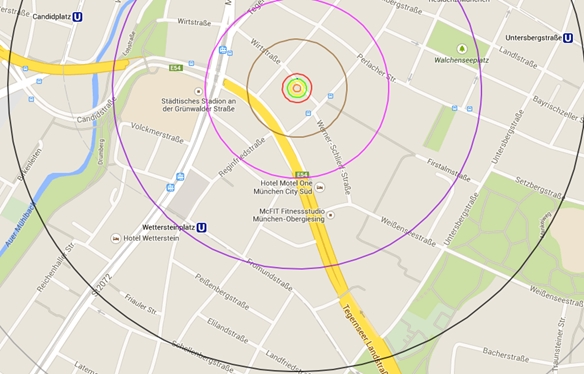 Example of a scaled model of the Solar System on the city map of Munich showing the orbits of Mercury, Venus, Earth, Mars, Jupiter, Saturn, Uranus and Neptune around the Sun (located at the city center in Marienplatz, Munich, Germany).

The activity consists of engaging students to build a reduced-scale model of the Solar System. It is very difficult to visualize the great empty space that exists between the planets and the Sun and to realize how big or small these are relative to each other. The following steps may help in the realization of the scale model:

Involve students in an introductory discussion about the Solar System:

Engage students in predicting the model:

By the end of this step, students should be able to understand that both distance and size are required to build a scale model.

Have students build a scale model based on calculations

Organize a walk with students to the different locations of the Solar System bodies on a city map * Motivate students to go on a journey through the Solar System. * Hand the Sun and the planets to students before starting the walk. * Make sure most students are more or less familiarized with the locations placed on the map. * Feel free to separate students into different groups to represent each body and stand on their location while the rest reach the next. This step depends on the city type you are located and it is more suitable on a long straight street. * When reaching to the different locations, ask students facts and characteristics about each of the bodies. Relate the planets’ orbital periods to their distances to the Sun (the further away they are, the larger the orbital period).

The activity should help students understanding the great distances between Solar System bodies and their relative size. It should provide a sense on how a scale model is built and its relevance to visualize the Solar System around their city. Students should reflect on how the model changes if only a single characteristic of the celestial body is taken into account in the calculations.