Hypothesis: “Objects are bound together and we need energy to break them.”
Explanation: What happens when we drop an object (say an egg) from a height of 1 cm or 1 meter? In the first case, some damage is observed on the egg’s surface, while in the second case the egg is destroyed. So, where did the kinetic energy of the egg go? Into breaking the egg. We need a certain amount of energy to break objects, called the “binding energy”.

Keep the glass marble system at the end of the slide and then release the system (figure 3). Progressively increase the height (figure 4) until the energy is enough to separate the balls (see 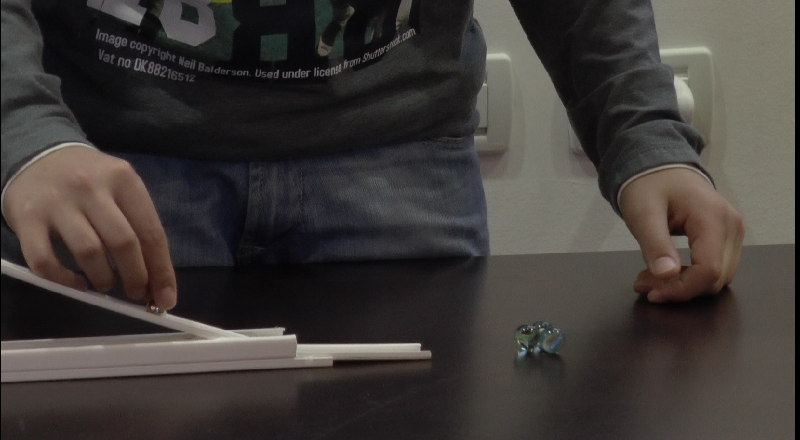 Try various types of collisions (head-on, off-centred) with more than three marbles.
Explain what happens. Why do the marbles separate in some cases?

What did we learn?
- Energy transforms
- Scientists use collisions to explore what the matter is made of.

For external resources see the following videos:
- The story of kinetic and potential energy//www.youtube.com/watch?v=G6mmIzRz_f8
- A quick look around the LHC

The main theme of this activity is how to break particles to study their composition. With a simple device (“the accelerator”), the student studies the effect of collisions between marbles at various heights. This is the time to introduce the important theme of various forms of energy, such as potential, kinetic and binding energy and the possibility of transformation from one form of energy to another.