The Sun is a star. It is a rather ordinary star - not particularly big or small, not particularly young or old. It is the source of heat which sustains life on Earth, and controls our climate and weather. It is the closest star to Earth, and the most closely studied. From it we have learned a great deal about the physical processes which determine the structure and evolution of stars in general.

It is almost perfectly spherical and consists of hot plasma interwoven with magnetic fields. It has a diameter of about 1,392,684 km (865,374 mi), around 109 times that of Earth, and its mass (1.989×1030 kilograms, approximately 330,000 times the mass of Earth) accounts for about 99.86% of the total mass of the Solar System. Chemically, about three quarters of the Sun’s mass consists of hydrogen, while the rest is mostly helium. The remainder (1.69%, which nonetheless equals 5,600 times the mass of Earth) consists of heavier elements, including oxygen, carbon, neon and iron, among others.

When observing the Sun with appropriate filtration, the most immediately visible features are usually its sunspots, which are well-defined surface areas that appear darker than their surroundings because of lower temperatures. Sunspots are regions of intense magnetic activity where convection is inhibited by strong magnetic fields, reducing energy transport from the hot interior to the surface. The magnetic field causes strong heating in the corona, forming active regions that are the source of intense solar flares and coronal mass ejections. The largest sunspots can be tens of thousands of kilometers across. 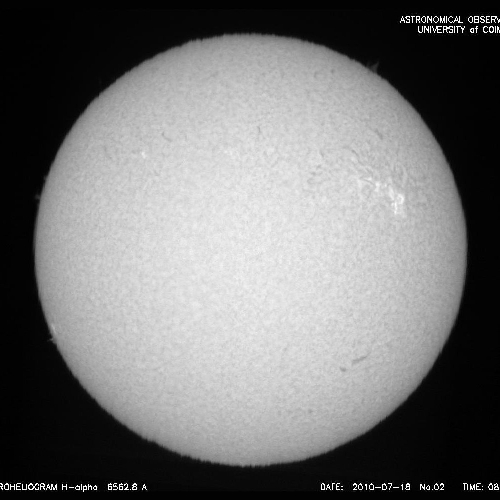 This activity concludes when the students verify that the number of detected sunspots may change through the days.

Type(s) of learning activity
Observation based