Our own galaxy consists of about 200 billion stars, with our own Sun being a fairly typical specimen. It is a fairly large spiral galaxy and it has three main components: a disk, in which the solar system resides, a central bulge at the core, and an all-encompassing halo.

The disk of the Milky Way has four spiral arms and it is approximately 300 parsecs thick (1 parsec is approximately 3.26 light years) and 30,000 parsecs in diameter. Compare this to the four hours it takes light to travel from the Sun to Neptune, showing the scale of the Milky Way is immense. It is made up predominantly of Population I stars which tend to be blue and are reasonably young, spanning an age range between a million and ten billion years.

The bulge, at the centre of the galaxy, is a flattened spheroid of dimension 1000 parsecs by 6000 parsecs. This is a high density region where Population II stars predominate---stars which tend toward red and are very old, about 10 billion years. There is growing evidence for a very massive black hole at its centre.

The halo, which is a diffuse spherical region, surrounds the disk. It has a low density of old stars mainly in globular clusters (these consist of between 10,000 - 1,000,000 stars). The halo is believed to be composed mainly of dark matter which may extend well beyond the edge of the disk.

There are two main categories, the spiral and elliptical galaxies, but also lenticulars and irregulars.

The spiral category includes our own galaxy. They fall into several classes depending on their shape and the relative size of the bulge: ordinary spirals are labelled either Sa, b, c, d or m while those which have developed a bar in the interior region of the spiral arms are SBa, b, c, d or m. Spiral galaxies are characterized by the presence of gas in the disk which means star formation remains active at the present time, hence the younger population of stars. Spirals are usually found in the low density galactic field where their delicate shape can avoid disruption by tidal forces from neighbouring galaxies.

The elliptical galaxies are placed in the categories E0-7 depending on their degree of ellipticity, with E0 being least elliptical. They have a uniform luminosity and are similar to the bulge in a spiral galaxy, but with no disk. The stars are old and there is no gas present. Ellipticals are usually found in the high density field, at the centre of clusters. 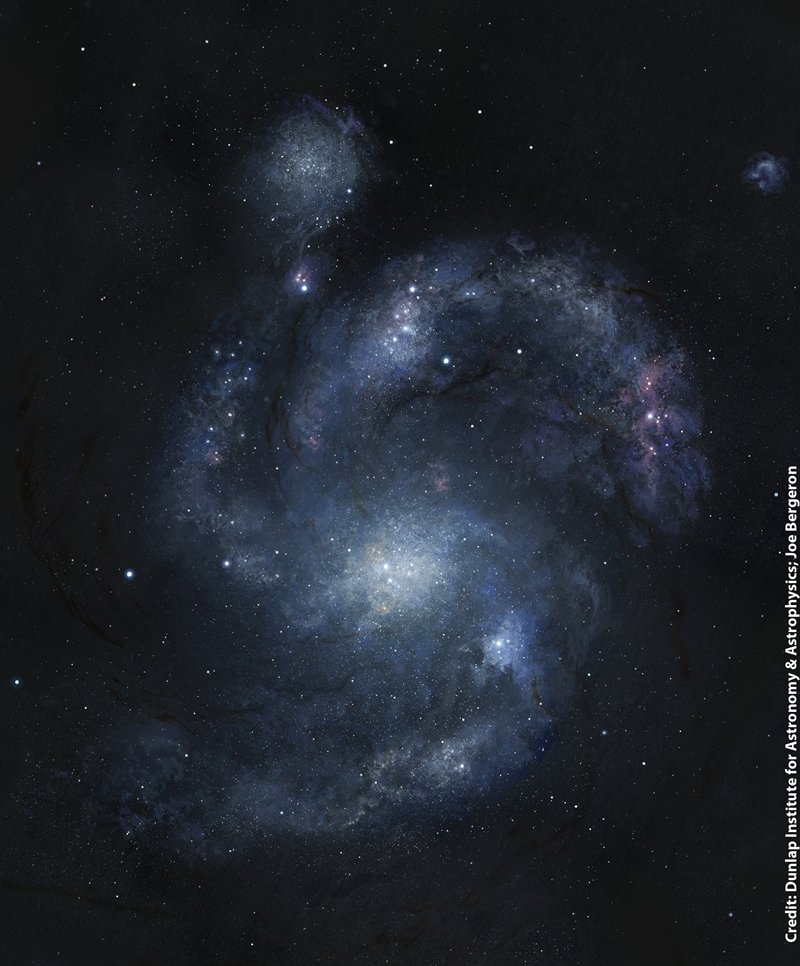 Lay out a glitter sheet or a blue poster board sheet cut to size with white paint starfield.

Mix white paint with a little water and paint a soft white for the center of the Milky Way galaxy. Let dry.

Dip medium-size brush into Elmer's glue and paint the center area with the glue.

Take white glitter and sprinkle over wet glue center of the galaxy.

Then form the yellow glow around the center by painting more Elmer's glue around the edge of the center and carefully sprinkle yellow or gold glitter over the wet glue.

Use your brush and finger tips to gently press in and spread out the glitter.

Mix more watered-down white paint and form the spiral arms with the brush to give the arms a soft, filmy look (see attachment 2).

This will serve as a base to put the glue and glitter over. Let dry. Pour out some Elmer's glue on a small sheet of paper, dip brush in glue and paint the glue over the spiral arms.

Sprinkle white glitter over the wet glue on the arms, pressing and spreading gently with fingertips. Allow to dry.

For the Milky Way view from Earth design, I followed the same directions from above when using the wet glue and glitter only using a different design of the Milky Way path across the sky. Be sure to paint a watered-down white base of paint all along the path of the Milky Way. This will give the effect of a soft white glow under and around the edges of the glitter. Mix the blue and black acrylic paint together for a dark blue hue. By looking at the photo, paint the dust fields along the path in the galaxy with the dark blue paint mixture. Let dry. Dip brush into the glue and lightly paint over the dark blue areas. Sprinkle blue glitter over the wet glue. I added white rhinestones randomly to give the effect of stars.

Of course, you can pick any nebula or galaxy that you find online or in a book and create something different from the Milky Way galaxy. Load up on glitter and glue and be creative!