The teacher could discuss the answers with students, encouraging them to share their calculated values of the different types of galaxies found in both the field and the cluster as well as their answer to the final question about the morphology-density effect.

Hypothesis Question: 30 points – Student’s hypothesis should mention the effects of interactions and ram-pressure stripping in changing past gas-rich spirals into current gas-poor ellipticals and lenticulars in clusters.

Astronomers classify galaxies based on their appearance into three main classes: elliptical, spiral, and irregular galaxies. Edwin Hubble first came up with this classification scheme. Hubble originally thought that the ‘tuning fork’ sequence represented the evolutionary progression of galaxies. This concept turned out to be wrong, but astronomers still use these general categories and labels to describe galaxies.

An additional type of galaxy category:

Interacting: Consists of two or more galaxies that are so close together that they are affecting each other’s shape.

Data provided in this activity:

Galaxies are found throughout the universe, and live in a variety of environments. Galaxies can be found in clusters, groups, or in isolation.

Sometimes galaxies are found in smaller numbers called groups, with just a handful of galaxies being members of the group. The Local Group contains our Milky Way galaxy, and our next door neighbours the Magellanic Clouds and the Andromeda galaxy, along with a few dozen smaller galaxies.

At other times, galaxies can be isolated and be far from another in the field. These are called field galaxies.

A galaxy cluster is a large structure in the universe consisting of hundreds or thousands of galaxies that are gravitationally bound together. The large number of galaxies in a cluster are all packed close together, such as in the Coma Cluster. Clusters make some of the largest, and densest structures in the universe. Clusters, groups, and some isolated galaxies can all be part of even larger structures called superclusters; at the largest scales in the visible universe, superclusters are gathered into filaments and walls surrounding vast voids. This structure is often referred to as the ‘cosmic web’.

Students will first investigate images of 40 galaxies to become familiar with how galaxies appear and are shaped differently. They will come up with their own classification scheme for galaxies, and then explore how astronomers actually classify galaxies into four main groups. 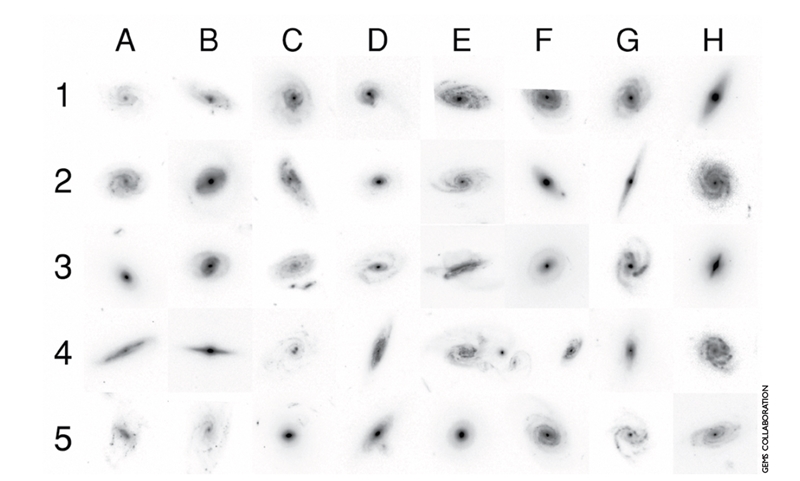 Tell students: Above diagram shows a mosaic of 40 galaxies. These images were taken with the Hubble Space Telescope and show the variety of shapes that galaxies can have. When astronomer Edwin Hubble first started studying these various types of galaxies in the 1920s, he developed a way to organize and categorize them. He created a classification scheme in which he grouped similar galaxies together.

Ask students to share their classification schemes with each other. Suggested points of discussion:

These discussion points can be re-visited later in the activity as well.

While students are thinking of these kinds of ideas, encourage students to discuss how they could investigate the answers to these questions. (Perhaps some students will think of the idea that interactions with other galaxies could be important, and that looking at regions where there are many galaxies so many interactions take place might be a way of investigating this. Whether they come up with this idea or not, this previous discussion will help them to be in a better position to think through this idea later in the activity.) 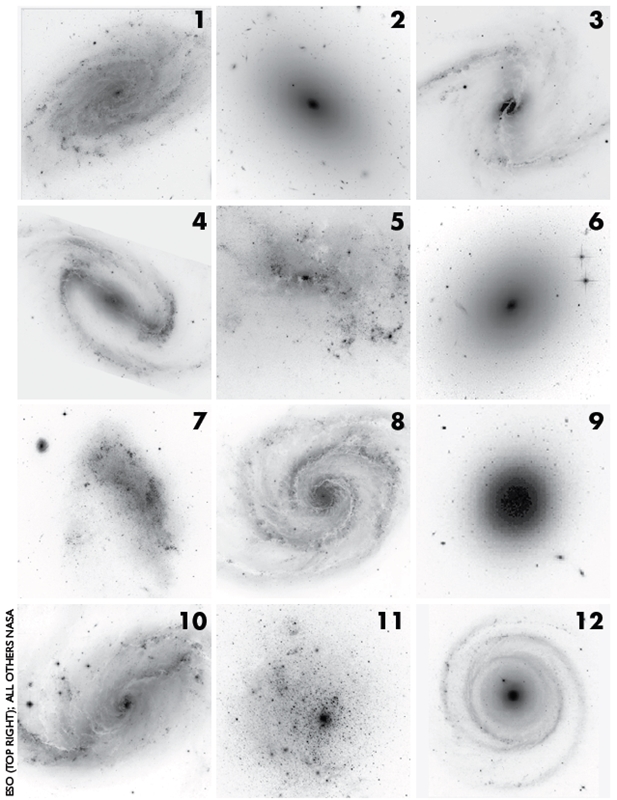 Tell students: Astronomers have developed their own classification scheme for galaxies, based on the galaxy shape (often called “morphology”).
The definitions of the main galaxy types which astronomers use are listed below. Using these definitions, place the 12 galaxies shown in the above figure into their commonly-used categories. Fill in the table below.

Note: The smallest galaxies are often called dwarf galaxies (No. 5 and No. 7 are dwarf galaxies). These contain only a few billion stars — a small number compared to the Milky Way’s 200 billion. The largest ellipticals contain several trillion stars.

Tell students: Use the image below and guidelines to help decide how to identify and count the galaxies. 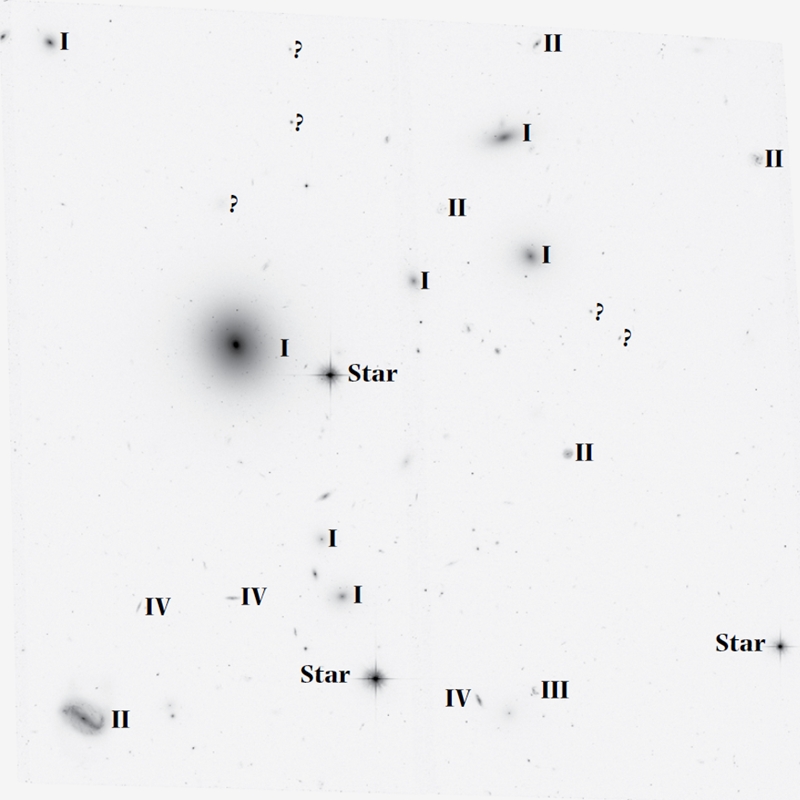 Download the images “Galaxies Cards” A-D to count the types of galaxies seen in each image. Count the number of galaxies of each morphological type and write down the number in the correct spot in the table.

Tell students: Galaxies are found throughout the universe, from our next door neighbours — the Magellanic Clouds and Andromeda — all the way out to the visible universe 13 billion light years away. Galaxies live in a variety of environments. Sometimes large numbers of them are packed close together in clusters, such as the Coma Cluster; sometimes they gather in smaller numbers called groups, like the Local Group that contains the Milky Way; and sometimes they are isolated far from one another in the field. The table below shows the different properties for the different types of galaxy environments.

In the previous step, Galaxy Cards images A and C show the dense central core of the Coma Cluster, and images B and D show galaxies out in the field. (NB Astronomers sometimes use the term “field” to mean the area outside galaxy clusters.) Fill in the table below using the numbers you wrote down in the table from step 5 of the activity.

Ask students to think about and discuss in groups: What trends do you notice from the data you’ve analysed above? Do you notice anything about where different types of galaxies tend to be found? (Extra prompt: Do you tend to see more spirals in the dense cluster or in the field? What about ellipticals?) _ Students should notice that spiral galaxies are more common in the field, and ellipticals are more common in dense clusters._ Follow-up question: Does that seem surprising? The goal here is to get students to ask “Why does the number of spiral galaxies (or elliptical galaxies) depend on where the galaxy is located?”

Ask students to discuss and write down ideas for why galaxy type seems to be affected by where the galaxy is located.
Ask students how they could investigate their ideas: What predictions would their ideas make? What additional observations or information would they want to have?
How could they quantify this trend using the data?

The following steps tell how students can investigate this trend, first by quantifying it, and then by reading more information about how galaxies form and evolve. You can tell them exactly what to do as below.—Better yet, have them discuss in groups how they could investigate their question, starting with how to quantify the trend and then determine the procedure themselves for making the calculations below.

Using a calculator, find the percentages of each galaxy type in the cluster versus the field (Ignore IRs and INTs). Use your numbers from the table above to calculate the percentages and fill in each of these blanks below:

Students should by now (from Step 7) have asked the question, “Why do we see more elliptical and lenticular galaxies in clusters and more spirals in the field?” (This question can also be phrased, “Why do we observe the morphology-density effect?”) They should also have had the idea that interactions could be involved, and maybe even the idea that more interactions take place in denser environments, like the center of a cluster.

Below is information that can be used to answer this question. You can give students this text to read, then ask them to discuss and write down an explanation for this effect; or you can continue to prompt students to brainstorm and discuss ideas for possible explanations, then potentially have them do research in textbooks / on the internet on their own or in groups, and then have them share their explanations with each other.

Many galaxies contain what astronomers call “gas,” which generally means hydrogen gas, sometimes mixed with the gases of other elements, and sometimes mixed also with dust. Gas clouds can collapse by gravity, which leads to the formation of stars.
Astronomers have observed many spiral galaxies (S and SB) and find that most of these galaxies contain a lot of gas, and are currently forming lots of new stars. Elliptical and lenticular galaxies (E, S0, and SB0) are gas-poor and are not making many new stars.

Galaxies that are very close to each other, such as those in clusters, often undergo many violent interactions with each other. When a gas-rich spiral galaxy interacts with another galaxy, it tends to quickly use up most of its gas to make new stars, leaving little gas behind. Galaxy-galaxy interactions often change gas-rich galaxies into gas-poor galaxies. Many lenticular galaxies are the remains of old spirals that have lost their gas, and many elliptical galaxies are the remains of several spiral galaxies that have collided.

Galaxy clusters are usually filled with a lot of extremely hot gas that is spread between galaxies throughout the cluster. However, there is no hot gas like this out in the field. When the radiation from this hot gas hits a spiral galaxy, it strips the spiral galaxy of its much cooler gas in a process called “ram-pressure stripping.” This process quickly converts a gas-rich spiral galaxy into a gas-poor lenticular galaxy. Spiral galaxies have a hard time surviving in the superheated gas environment.

As you see, galaxies change and evolve over time, and galaxies we observe in the nearby universe today have had a very long history already.

Students identify the galaxies by making calculations, working through the worksheets and drawing a hypothesis about the morphology-density effect.