Seasons Around the World

Build a model of the Earth and understand the concept of seasons around the world! After completing the activity, students learn that seasons are determined by the angle at which the rays of the Sun fall on the Earth. So at the Equator there is very little difference between the seasons.

When sunlight hits the Earth, it does not produce same effect everywhere on the planet. Because the Earth is round, a given amount of sunlight will cover a larger or smaller surface depending on the location we consider. The closer the Sun is to being vertical over our heads, the more it warms up Earth’s surface.

The Earth’s rotation is not upright. The Earth’s rotation axis is slightly tilted or leaning on its side by 23.5 degrees compared to the Earth’s orbit around the Sun. This tilt means that during summer in the Northern Hemisphere, the northern end of the Earth’s spin axis points towards the Sun. During winter in the Northern Hemisphere, the southern end of the Earth spin axis points towards the Sun. Now consider a location on the Earth. The rotation of the planet around the Sun, and around Earth’s axis means that more or less sunlight is received, because less light is received when the Sun is closer to the horizon. The amount of received sunlight directly influences the amount of heat delivered by the Sun. This leads to different seasons.

Per pair of students:

For the activity, you will need to make a model of the Earth, using an orange. Make sure you can make the classroom dark. It would help if students are already aware that seasons exist and they are associated with different weather patterns and temperatures.

Turn off the lights and close the blinds in the classroom.

Organise the student into pairs. Give each pair a torch and tell them to shine it onto their table at different angles. Can they see a difference in the size of the area covered by the light?

Explain that light shone at a shallow angle covers a larger surface area than light shone from a right-angle. The students complete Task 1 on the worksheet.

The students complete Task 2 on the worksheet, up to step 11.

Discuss the tasks. Explain that the Sun, like the torch, produces a fixed amount of light. The larger the surface area on which the sun shines, the larger the area over which the heat is spread. So each part of that area gets less heat than when the light from the Sun is concentrated on a smaller area. At the Equator the Sun shines vertically on the Earth's surface, so it falls on a smaller area. This means it is warmer at the Equator.

Together, look at the drawings on the worksheet. Use your orange to show that the Earth is tilted slightly diagonally. Rotate the orange around the torch. Start with the North Pole turned away from the Sun. Now the students can see that sometimes the North Pole is turned towards the Sun, and sometimes away from it. 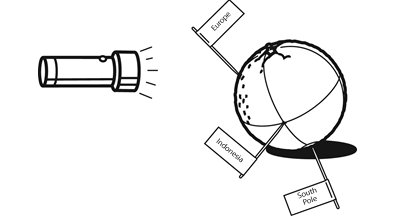 Show that the Sun shines more directly on the Northern Hemisphere when the North Pole is turned towards the Sun than when the North Pole is turned away from it. Explain that the seasons on Earth are caused by the different angles at which the Sun's rays hit the earth. This is why it is hotter in the summer than in winter. Discuss with the students that the sunlight never falls vertically on Europe. You can explain that this because there are always shadows. Even in the middle of the summer at noon when the Sun is highest on the sky, it is still not vertically above us.

The students complete the rest of Task 2 on the worksheet. Say that in Europe (or anywhere not on the Equator) the Sun shines for a shorter time in the winter than it does in the summer. Say that this is because of the angle of the Sun in relation to the surface of the Earth. Because the angle of the Sun shining on Europe changes throughout the year, we experience different seasons. This is because the amount of heat and light changes.

Activity 3: Seasons are not different everywhere

The students complete Task 3 on the worksheet. Ask them why we have such different seasons in Europe, while the countries on the Equator do not. Conclude that this is because of the changing angle at which the midday Sun shines on the Earth's surface in Europe, whereas it is more constant at the Equator. Refer back to the activity Vertical or shallow angle. 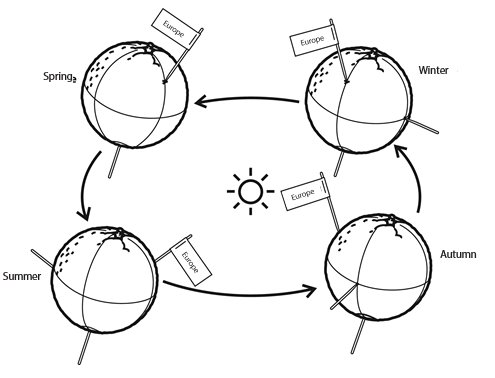 Students should be able to answer questions related to the learning objectives.

UK KS1:Year 1 Science - Seasonal changes: Observe and describe the weather associated with the seasons and how day length varies.
UK KS1 Geography - Human and physical geography: Identify seasonal and daily weather patterns in the United Kingdom and the location of hot and cold areas of the world in relation to the Equator and the North and South Poles.
UK KS2: Year 5 Science - Earth and space: Describe the movement of the Earth, and other planets, relative to the Sun in the solar system.